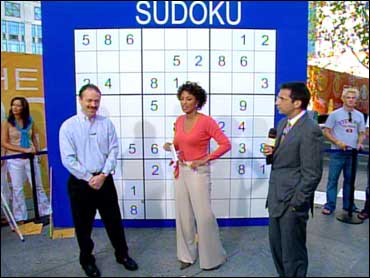 If you haven't heard of it yet, sudoku is the newest puzzle craze to sweep the country. It's kind of like a crossword, but with numbers instead of letters.

It sounds hard, and it certainly can be, but on Wednesday's The Early Show, Will Shortz, the puzzle editor of the New York Times offers a free lesson in how to solve sudoku. He has edited two new books on sudoku.

"Sudoku is a puzzle with pure logic," Shortz says about the American invention. "It has a grid of 9-by-9 divided into nine 3-by-3 boxes. The object is to put the numbers into each box, row and column — there's no mathematics involved. All you have to do is know the numbers 1-9."

Here are a few tips Shortz offers for solving strategy:

1) Use pencil, not pen, because there is a lot of erasing.

2) Work the 3-by-3 boxes first, because the clues are easiest to see. Once you've exhausted the boxes, then go to the rows and columns.

3) Once you've narrowed a square to two numbers, pencil them lightly into the boxes in the grid. You can come back and change them if you have to.

4) Don't guess. A good sudoku puzzle can be solved with pure step-by-step logic.

If you write the wrong number in a square, it can be difficult to figure out where you've made your mistake later. Unlike a crossword puzzle, where you can localize your mistake, with sudoku you can't always find where you went wrong and erase it.

5) If you've narrowed the possibilities down to two numbers for the square, row or column, then you know that no other square in that row, column or box have those digits.

6) When you get new information, always follow it through to its logical conclusion right then and there. If you fill in that information, try to fill in other information based on it while you're doing it.

Are you ready to play? to get a sudoku puzzle. And to check your answers.