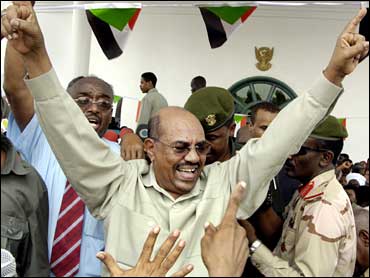 The prosecutor of the International Criminal Court filed genocide charges Monday against Sudan's president, accusing him of masterminding attempts to wipe out African tribes in Darfur with a campaign of murder, rape and deportation.

Luis Moreno-Ocampo asked a three-judge panel at the International Criminal Court to issue an arrest warrant for President Omar al-Bashir to prevent the slow deaths of some 2.5 million people forced from their homes in Darfur and still under attack from government-backed janjaweed militia.

"Genocide is a crime of intention - we don't need to wait until these 2.5 million die," he said in an interview with The Associated Press.

"The genocide is ongoing," he added, saying systematic rape was a key element of the campaign. "Seventy-year-old women, 6-year-old girls are raped," he said.

Moreno-Ocampo was undeterred by concern that his indictment against Al-Bashir might ignite a storm of vengeance against Darfur refugees and lead to the closing of Sudan's doors to relief agencies and possibly peacekeeping troops.

"I am a prosecutor doing a judicial case," he said.

Al-Bashir "wants to end the history of the Fur, Masalit and Zaghawa people. I don't have the luxury to look away. I have evidence," the prosecutor said in a statement.

"His motives were largely political. His alibi was a 'counterinsurgency.' His intent was genocide," the statement said.

"The purpose of a trial at the ICC is to make those responsible for crimes against humanity accountable and, in the case of Darfur, to stop the ethnic cleansing that has been occurring for almost five years," said CBS News foreign affairs analyst Pamela Falk.

But, said Falk, there are concerns within the human rights community about whether an arrest warrant for Bashir might cause a backlash that could fracture Sudan's fragile peace process.

Moreno-Ocampo filed 10 charges: three counts of genocide, five of crimes against humanity and two of murder. Judges are expected to take months to study the evidence before deciding whether to order Al-Bashir's arrest.

One witness cited by prosecutors said rapes are woven into the fabric of life in Darfur.

"Maybe around 20 men rape one woman. These things are normal for us here in Darfur," her statement said. "I have seen rapes too. It does not matter who sees them raping the women - they don't care. They rape girls in front of their mothers and fathers."

Moreno-Ocampo said the rapes were producing a generation of so-called "janjaweed babies" and "an explosion of infanticide" by victims.

Despite Moreno-Ocampo's bold move, Al-Bashir is unlikely to be sent to The Hague any time soon. Sudan rejects the court's jurisdiction and refuses to arrest suspects.

In Khartoum, Fathi Khalil, a senior member of Al-Bashir's party and head of the bar association, denounced Moreno-Ocampo's move, which he said was made under international pressure and undermined its reputation for independence.

The indictment "proved that he is playing a political role, not a legal one," Khalil told The Associated Press.

The Sudanese Liberation Movement-Unity, a rebel group in Darfur, welcomed the move and offered to help arrest and extradite any war criminals from Sudan.

The filing marked the first time prosecutors at the world's first permanent, global war crimes court have issued charges against a sitting head of state.

Moreno-Ocampo's decision to go after Al-Bashir is expected to cause further turmoil in Sudan, and some analysts fear it could make life even worse for refugees living in Darfur's sprawling camps and reliant on humanitarian aid for food and water.

A group of human rights groups from around the world said Sudan already is blocking peacekeepers and humanitarian aid.

"Given the track record of the regime, the international community must be ready to respond quickly and appropriately to any reprisals that may be threatened following today's announcement," the groups said in a joint statement. "If there are such actions, the responsibility will be on those who perpetrate them."

An arrest warrant would effectively turn Al-Bashir into a prisoner in his own country. In the past, Interpol has issued so-called Red Notices for fugitives wanted by the court, meaning they should be arrested any time they attempt to cross an international border.

"Charging President Al-Bashir for the hideous crimes in Darfur shows that no one is above the law," said Richard Dicker, director of the group's International Justice Program.

Moreno-Ocampo said most members of the three targeted ethnic African groups were driven from their homes by Sudanese forces and the janjaweed in 2004. Since then, the janjaweed have been targeting the camps aiming to starve the refugees.

"These 2.5 million people are in camps. They (Al-Bashir's forces) don't need gas chambers because the desert will kill them," Moreno-Ocampo said, drawing comparison's with Nazi Germany's most notorious method of mass murder during the Holocaust.

The refugees "have no more water, no more food, no more cattle. They have lost everything. They live because international humanitarian organizations are providing food for them," he added.

An estimated 300,000 people have died in Darfur since conflict erupted there in 2003 when local tribes took up arms against Al-Bashir's Arab-dominated government in the capital, Khartoum, accusing authorities of years of neglect.

Moreno-Ocampo said that the most conservative estimate put the death toll at 118,000. He estimates about 35,000 of them were "directly killed" and the remainder died indirectly - likely as a result of hunger or disease.

He said the international community needs to act to prevent more deaths.

"The international community failed in the past, failed to stop Rwanda genocide, failed to stop Balkans crimes," he added. "So this time, the new thing is there is a court, an independent court ... who is saying 'this is a genocide."'

Al-Bashir's ruling National Congress Party had warned Sunday of "more violence and blood" in the vast western region if a warrant for his arrest is issued, state Sudanese TV reported.

There are also fears the case could spark a backlash against the 9,000-strong U.N.-African Union peacekeeping force in Darfur.

Moreno-Ocampo said any attacks on peacekeepers would be "further evidence that he's committing genocide - attacking those that like to protect these people."

A spokeswoman for the force said it had not suspended any military operations.

"All essential peacekeeping operations are being carried out by troops," Shereen Zorba told the AP by e-mail from Khartoum.

The U.N. Security Council referred the case to the ICC three years ago, deciding there was enough evidence to begin an investigation into Sudanese government officials alleged involvement in the atrocities taking place in Darfur, explained Falk.

The prosecutor said it is up to the Security Council to "ensure compliance with the court's decision."

But achieving unanimous backing for any action will be fraught with problems since two of the council's members, China and Russia, are Sudan's allies.

Indicting a sitting president is not unprecedented.

Other international courts previously have indicted Serb leader Slobodan Milosevic and Charles Taylor of Liberia while they were in office. Milosevic died in custody in The Hague in 2006 shortly before the end of his trial, while Taylor is on trial in a courtroom just four stories above the room where Moreno-Ocampo made his announcement.