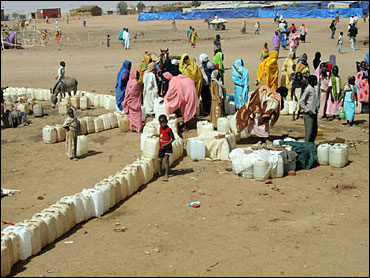 This column was written by Eric Reeves.

Last August, U.N. Security Council Resolution 1706 authorized the rapid deployment of a robust force of 22,500 U.N. troops and civilian police to Sudan, with an explicit mandate to protect civilians and humanitarian operations and attempt to staunch the spreading genocidal violence in the Darfur region. Had it been deployed, such a force could have done much to avert the massive human displacement and destruction of the past nine months. But the Sudanese regime refused to allow the peacekeepers into the country, and the United Nations declined to intervene without Khartoum's approval.

That approval seemed to come on Tuesday, as the Khartoum regime agreed to allow a joint peacekeeping force comprising U.N. troops and African Union forces into Darfur. Noureddine Mezni, a spokesman for the African Union, called the announcement "a breakthrough moment." By now, however, there is a long history of such breakthroughs on Darfur — each of which has proved worthless.

It has been almost three years since the regime made the first of numerous agreements to disarm the deadly Janjaweed militia. Yet, last September, a U.N. panel of experts found that Khartoum was arming the Janjaweed more heavily than ever. Three years ago Khartoum also agreed to grant unfettered access to aid organizations operating in Darfur. Today, humanitarian workers continue to face threats and obstructionism in their struggle to provide succor to the 4.7 million people affected by Khartoum's relentless war of attrition. Key terms of the January 2005 peace agreement that ended 22 years of North-South conflict, such as equitable wealth sharing, establishing a legitimate North-South border, and disarming regime-allied militia forces, have similarly not been implemented, threatening to reignite the conflict. And Khartoum has also failed to follow through on security commitments made under the Darfur Peace Agreement, signed in Abuja in May 2006.

There is no reason to suppose the current agreement will be any different. Key issues, including the critical matter of command-and-control for the deploying force, have been left deliberately vague in an expedient effort to prevent disagreement between the U.N. and the AU. The composition of the force and the role of non-AU troops have also not been addressed seriously. Like all other "agreements" Khartoum has made, this one will prove vacuous —subject to reneging, re-interpretation, dilatory review, and obstructionism. Indeed, Khartoum has already suggested that it may attach certain conditions to the agreement that will curtail its effectiveness.

Rather than a real solution to the crisis in Darfur, Tuesday's agreement is very likely little more than a way for this canny regime to undercut the impending U.N. Security Council meetings in Accra and Addis Ababa, which seek to address a range of troubling issues in Africa.

But, even if Khartoum were sincere, there is reason to doubt the effectiveness and urgency of the new hybrid force. Since last year, fewer than 200 U.N. technical personnel have deployed to assist the crumbling and badly demoralized African Union mission in Darfur. This small force was to have been the first of three "phases," vaguely agreed to in the document that emerged from a meeting of Khartoum's génocidaires, the U.N., and the AU in Addis Ababa last November. The hybrid force now being so widely touted was to have been the "third phase." But "phase two" of the Addis plan remains unimplemented, without any sign of the support personnel or logistical resources critical to the on-the-ground success of the large hybrid force. Indeed, until phase two is completed the hybrid force cannot deploy.

The earliest this force could deploy, then, is 2008. That could be hundreds of thousands of deaths from now, especially if international aid organizations are forced to withdraw because of increasing insecurity. The urgency reflected in Resolution 1706 is nowhere in evidence. And the latest "breakthrough moment" will likely hit yet another wall.

By Eric Reeves
If you like this article, go to www.tnr.com, which breaks down today's top stories and offers nearly 100 years of news, opinion and analysis