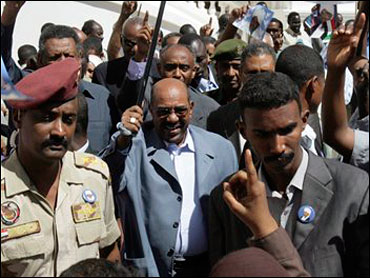 The International Criminal Court's decision to pursue a sitting head of state on war crimes charges puts others around the world on notice, but it's also raising questions about which leaders are being targeted.

African and Arab nations say they will support Sudanese President Omar al-Bashir, fearing the warrant issued against him Wednesday will bring even more conflict in Darfur, where up to 300,000 people have died since 2003, and further destabilize Sudan.

Al-Bashir denounced the tribunal, the U.N. and aid agencies on Thursday as part of a new "colonialism" that aims to destabilize his country.

The Sudanese president danced and waved a cane defiantly before thousands of supporters, as the arrest warrant had its first repercussions on the ground. Sudan ordered at least 11 aid agencies to leave Darfur and cease operations in retaliation for the ICC's arrest warrant. The groups started the process of moving out Thursday.

Critics question why only Africans have been charged since the ICC - branded "the white man's court" by Sudan's information ministry - began its work six years ago. A temporary court, the tribunal for the former Yugoslavia, indicted Slobodan Milosevic in 1999 while he was still president of Yugoslavia.

The chairman of the 52-state African Union has accused the court of "double standards," asking why no cases have emerged from conflicts in the Caucasus, Iraq or Gaza.

"The African states were the strongest supporters of establishing the ICC. It wouldn't have been possible without them. But there has been a significant shift in the past year," said Christopher Hall, senior legal adviser to Amnesty International.

Outside Africa, ICC prosecutor Luis Moreno Ocampo is investigating possible cases in Colombia, Georgia and Afghanistan as well as a Palestinian request for charges against Israel for its actions in Gaza.

Even among the Africans, the court's choices are questioned. Why is it prosecuting former Congolese warlord and vice president Jean-Pierre Bemba for alleged crimes his fighters committed in Central African Republic, and not the ousted Central African leader who invited Bemba's forces?

Why not the many other Congolese warlords whose forces all are accused of gross atrocities, including those of President Joseph Kabila? And what about the leaders in Rwanda, Uganda and other African countries that sent troops to Congo?

"It's a very uneven path," said Reed Brody, legal counselor for Human Rights Watch. "We're still in a situation where if you are powerful or protected by the powerful you can avoid a reckoning."

"Are they on the side of the victim or the oppressor?" Tutu asked in a column in The New York Times. "Rather than stand by those who have suffered in Darfur, African leaders have so far rallied behind the man responsible for turning that corner of Africa into a graveyard."

Sudan is Africa's biggest country, covering an area the size of Western Europe and bridging the continent's northern Muslim Arabs and southern Christian and animist Africans in a union riven with conflict since independence from Britain in 1956.

In Darfur, the war began in 2003 when rebel ethnic African groups, many of them Muslim, took up arms against the Arab-dominated government they accuse of discrimination and neglect. Up to 300,000 people have died and 2.7 million have been forced from their homes in what the United States calls a genocide.

Those who argue that amnesty is a more powerful weapon for peace, though, point to Ugandan rebel leader Joseph Kony, who defaulted on a peace agreement after the court issued an arrest warrant against him.

In recent months, Kony's Lord's Resistance Army is accused of killing more than 1,500 civilians in northeast Congo and driving some 100,000 from their homes.

While another rebel leader, Bosco Ntaganda, is wanted by the International Criminal Court for war crimes, Congo chose rather to treat with him and integrate his fighters into the national army. The move appears so far to have diminished the most powerful rebel threat in eastern Congo.

Sudan has reportedly said that African nations opposed to al-Bashir's arrest warrant would pull out of the ICC in protest, but none had done so as of Thursday.

Thirty of the court's 108 member states are African. And every indictment it has brought acted on requests from African members - Uganda, Congo and Central African Republic. Al-Bashir's arrest warrant is the exception, initiated by the U.N. Security Council.

That in itself shows hypocrisy, critics say, given that three of the council's five permanent members - China, Russia and the United States - refuse to join the international court.

The precedent set by the court Wednesday could extend to former U.S. President George W. Bush, amid charges his officials were the architects of criminal detention policies that led to torture in Iraq and at Guantanamo detention center in Cuba. But that is an extremely remote prospect. The Security Council is unlikely to order that while Washington is a veto-wielding permanent member.

"The world's justice looks with one eye," complained Taher Nunu, spokesman for Hamas, the Islamic militant group that Israel has been battling in Gaza."