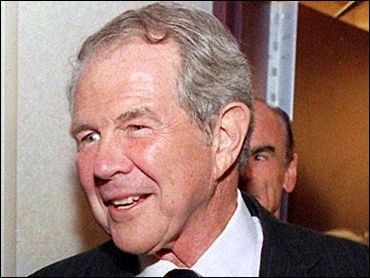 The Christian Broadcasting Network says Robertson had surgery to remove a cancerous prostate gland and is expected to make a full recovery.

The evangelist got further good news at the hospital - whose name has not been revealed - as doctors told him the surgery confirmed an earlier diagnosis that the cancer had not spread beyond the prostate.

"The surgeons were very pleased with the success of the procedure. We thank God for answering prayer and continue to pray for Pat's full recovery," said Michael Little, president and CEO of the Virginia Beach-based network.

Robertson, 72, was diagnosed shortly after Christmas and hopes to return to work in a few weeks.

Robertson's brother, A. Willis "Tad" Robertson - who was an Atlanta stockbroker - also had prostate cancer. He died of lung cancer last year.

Robertson's revelation last week that he had the disease came a day after Democratic presidential hopeful John Kerry, 59, underwent successful surgery for prostate cancer. Kerry, who was released from Johns Hopkins Hospital on Saturday, was also told there were no indications the disease had spread.

Cancer of the prostate, a gland involved in semen production, is the second-most common type of cancer in American men, behind skin cancer and is the second leading cancer killer of men, behind lung cancer.

Surgery is the most common treatment for prostate cancer that has not yet spread.

About 220,000 men will be diagnosed with prostate cancer this year, and 28,900 will die, the American Cancer Society estimates. Caught early, prostate cancer is highly curable.