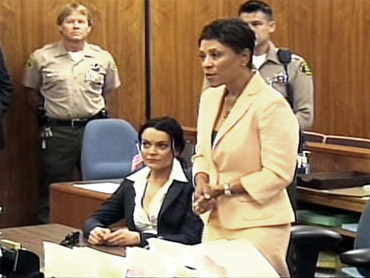 There's the Lindsay Lohan we all know: the one with two drunken driving arrests and repeat stints in rehab; the one in the tabloids, falling into a cactus and partying it up in Cannes when she should be in court; the one with a reputation so bad that reality star Tila Tequila once declared, "I must not be another Lindsay Lohan where I just flush everything I worked so hard for down the toilet for nothing."

So which one is the real Lindsay Lohan? And can the one who earned accolades as a young star and worked alongside Meryl Streep overcome her hot-mess persona?

The next chapter for each Lindsay has already begun. She's due in court on July 5 for a hearing to determine if she violated her probation on those drunk-driving charges and faces jail time if she did.

Casting Lohan, and having her promote her new role in Cannes - where she claimed her passport was stolen causing her to miss a mandatory court date - helped secure financing for "Inferno," Wilder says. And he thinks her performance in his movie could turn Hollywood's tides in her favor.

"Just because right now there's all this negative (stuff) being spewed about her, there's this core of worth, personally and creatively," he says of the 24-year-old actress. "When you put that out in front of people, that stands up."

Then there's her fashion brand, 6126. What began as a line of leggings has been reborn as a complete collection of sexy, sparkly pieces perfect for the club-hopping set. The first items are set to ship out at the end of the month to stores like Kitson and Neiman Marcus.

Lohan guided the design team, picked out all the fabrics and colors, and tried on hundreds of samples herself to get the look and fit just right.
She's also developing two handbag lines, and there are plans for shoes and cosmetics to follow as 6126 becomes "a complete lifestyle brand," says her business partner, Kristi Kaylor.

As far as Kaylor is concerned, Lohan is "a total pro." She knows the actress as a "genius designer" responsive, engaged and serious about building a brand.

"She blows me away with her creativity," Kaylor says. "I wish people could see the side of Lindsay that we do."

The Lindsay she sees is as comfortable at marketing meetings as she is in the front row of a high-profile fashion show. She's on time to her appointments, quick to respond to e-mails and deeply involved in all aspects of her business. Kaylor sees her as a budding entrepreneur.

Richard Luna, who's been making purses for 25 years and is working with Lohan on her lines, describes her as "a very smart, sharp gal (with) a brand-development path that's going to last several years."

But if Lohan is so together, how come it often looks like she's falling apart?

The press picks on her, says Kaylor, who talks with Lohan almost daily. Lots of girls trip and fall when wearing high heels, she says. Lots of 20-somethings enjoy the Hollywood club scene.

Lohan doesn't seem too interested these days in having professionals help shape her public image. She's suspended her relationship with publicist Leslie Sloane Zelnick. And her manager, Jason Weinberg, ignored a reporter's repeated messages asking him to defend his client.

Instead, the actress prefers handling her own PR 140 characters at a time. Active on Twitter (often late at night), she defends herself against tabloid rumors and calls out those she thinks are trying to bring her down.

"Samantha Ronson spit in my face," she posted early one morning about her former girlfriend. "This is all because of a FALSE accusation by tabloids & paparazzi," she wrote when her alcohol-monitoring anklet went off last month. "I was given the wrong call time-now I know on purpose...it was a set-up," she posted after apparently missing a photo shoot. "Thank goodness for Twitter," she writes. "The truth can be stated!!!"

Perez Hilton, who refers to the starlet as "Lindsanity" and "LOLhan" on his popular celebrity blog, says the actress has lived such a drama-filled life from a child star whose parents argued in the press to her own grown-up problems that his readers just want to see what she'll do next.

"It's still interesting to see Lindsay misbehaving and acting like the same person she was in 2007," he says, adding that he has met her many times and finds her "likable."

He thinks the same readers who delight in her misbehavior are actually rooting for her to succeed.

Other young starlets who started down troubled roads have corrected course. Britney Spears, 28, seems to have overcome her problems, which were well documented in recent years. Drew Barrymore, now 35, was a child star who went to rehab as a teen, then forged a successful acting and producing career. Fergie of the Black Eyed Peas, now 35, overcame the drug problems she blames on her stint as a child star to become a successful singer.

Wilder, her upcoming director, there's little question whether she will. Lindsay's troubles are a passing fad, he says, and that "three years from now, if you could fast-forward, it will be like, 'What was all that about?'"
BY SANDY COHEN