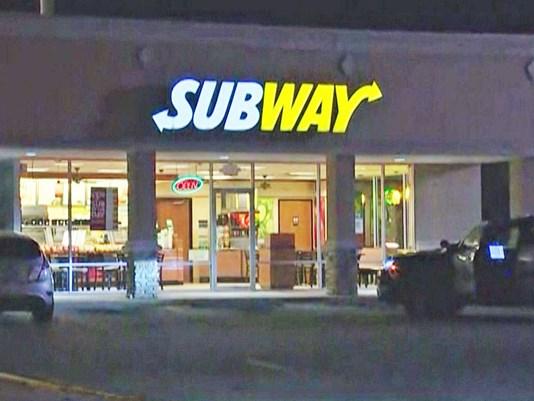 HOUSTON -- A teen worker was shot and killed in front of his mom during an armed robbery at a Subway restaurant Wednesday evening, police in southeast Houston say.

Police released a sketch of one of the wanted suspects Thursday afternoon. The suspect is described as a black man, 5’10” with a slim build. Police believe the suspect described is the shooter.

CBS affiliate KHOU reports that family members have since identified the victim as Javier Flores, a student at Cesar Chavez High School.

KHOU spoke to some of Flores’ friends at the campus today.

“He was a good, really good friend,” said Helizander Rodriguez. “He took a bullet for his mom.”

“I call him my hero just for doing that,” said Endy Herrera.

According to the Houston Police Department, it was around 8 p.m. when the 18-year-old was working at the restaurant and was shot in the neck by one of two robbery suspects.

Police said the victim’s mother was also working in the restaurant when the suspects walked in.

“During the robbery, it appears the black males entered the store, pointed a gun at a female employee who ended up being the victim’s mother. (The victim) tried to intervene and when he confronted the guy with the gun, he was shot.” said Detective David Crowder.

Emergency responders with the Houston Fire Department rushed Flores to Ben Taub Hospital but he did not survive.

Police said they don’t know if anything was taken in the robbery.

“They’re out here working and doing what they’re supposed to be doing and then these two suspects came in and cut that short and certainly there was nothing in there that was worth the life of the 18 year old.” said Detective Crowder.

The suspects are described as two young black males.

Witnesses said one of the suspects was around 18 to 20 years old, 5’6” to 5’8” tall, dark in complexion and wearing a dark blue hoodie with black pants.

The second suspect was described as being 17 years old, wearing a light blue hoodie and dark pants as well.

The suspects fled the scene in a 4-door, gold colored sedan, according to KHOU.

According to police, another robbery took place at a different Subway in Houston shortly after.

There is no word on if anyone was injured in the second Subway robbery.

Anyone with information that may lead to an arrest or charges should call Houston Crime Stoppers at 713-222-TIPS.