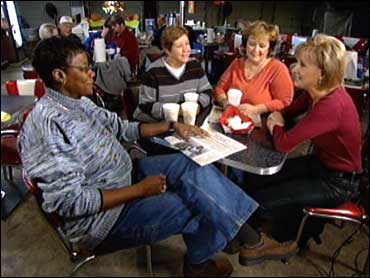 One the same day as a subway scare in Los Angeles, the federal government said it's preparing to test a system for detecting chemical attacks in subway stations.

The tests have been given greater urgency by widespread fears in America of possible chemical attacks after the terror visited on the United States.

Wednesday, Los Angeles fire investigators were unable to detect any hazardous agents in the city's subways after dozens of people said they fell ill from mysterious fumes. The Red Line was shut down for two hours when 27 people, including two police officers, reported being sickened.

"They complained of dried eyes, dizziness and minor respiratory distress," he said.

The fire department's hazardous material unit found no trace of dangerous chemical, biological or nerve agents in an hour-long sweep, Humphrey said, and classified the incident as a one-time release of an unknown substance. A local offcial said such incidents are not uncommon, and could have been triggered by anything from leaked pepper spray to spilled perfume.

But, in the wake of attacks, all such incidents are being taken super-seriously. An official from the National Nuclear Security Administration said the project has a new focus and new urgency.

"September 11 has galvanized our determination, we are in the process of looking to acquire additional resources, looking into ways of accelerating it," the official said in a telephone interview on condition of anonymity.

The U.S. government has been working on an early warning sensor system, thought to be the first of its kind in the world, for the past three years.

The system would detect and identify toxic chemicals, map contaminated zones and predict directions in which the hazardous gases might spread so emergency crews could redirect trains and passengers.

"It's a bit like a smoke detector in your house that's wired to the fire station... so that the fire department knows there's a fire, which floor it's on and what kind of fire it is," the official said.

"This is a response system. It's the only one in the world I'm aware of," she added.

One of Washington's 83 subway stations will host the test before the end of this year and by 2003 officials hope to carry out a multi-station check.

The Washington Metropolitan Area Transit Authority, whose trains carry 600,000 people around the capital each day, is working with the Department of Transportation, the National Institute of Justice and the Department of Energy on the project.

The Department of Energy has invested $6.45 million since 1998 in the initiative, dubbed PROTECT - Program for Response Options and Technology Enhancements for Chemical/Biological Terrorism.

Analysts have seen metro systems as vulnerable targets for chemical attacks since 1995, when members of a Japanese doomsday cult released sarin gas on a crowded Tokyo subway. The nerve gas killed 12 people and nearly 6,000 fell ill.

"I think Tokyo was a wake-up callI would think it was the 1995 equivalent of the events of two weeks ago," the NNSA official said.

Experts believe the two most likely chemical agents would be nerve gases like sarin which short-circuit the nervous system and mustard gas, used in World War One, which causes lethal internal and external blistering.

The system could eventually be developed to detect biological weapons.

Possible biological agents include anthrax, a highly contagious disease spread by spores which is almost always fatal, and smallpox, a virus which killed millions over centuries until it was declared eradicated two decades ago.

In the wake of the Sept. 11 attacks, the United Nations World Health Organization on Tuesday urged all countries to strengthen their defenses against biological and chemical weapons.

"Alarm bells are starting to ring. Under these circumstances it would be imprudent not to be thinking at least and planning as hard as possible," WHO executive David Nabarro said.

The National Nuclear Security Administration was reluctant to discuss specific details of the system, fearing this could help anyone planning a chemical attack.

Officials at the Washington transit authority, whose underground network covers 103 miles, declined to talk about the project.