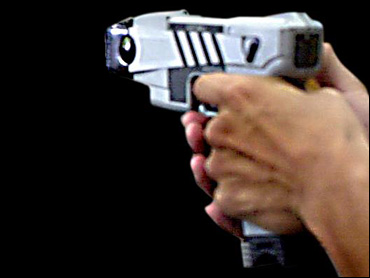 The Transportation Security Administration says non-lethal stun guns could be allowed on airplanes as another layer of security.

In a report to Congress, the agency said electronic shock devices could be an effective deterrent against hijackers. But it deferred a decision on whether to approve requests by United Airlines and Mesa Air Group to let their pilots carry the weapons.

"We see electrical shock devices as having the potential to contribute to our layers of security, but when it comes to deploying any weapons systems on aircraft, we owe it to the traveling public to make sure we do it safely," TSA spokesman Robert Johnson said Monday.

United and Mesa are the only airlines that have asked the TSA for permission to arm pilots with stun guns. In considering the proposals, the TSA needs to come up with rules on who will be trained to use the weapons; what kind of training will be required; and whether the stun guns will be stored in cockpits or cabins.

United spokesman Jeff McAndrews said the airline would continue to work with the TSA. "We're happy that progress continues to be made in implementing the use of Tasers in aircraft," McAndrews said, using a brand name for the weapon.

Congress created TSA after the Sept. 11 attacks and gave it the power to decide whether to allow pilots to carry guns or non-lethal weapons. After the TSA decided against arming pilots, Congress overrode the Bush administration and enacted a law allowing pilots to volunteer to carry guns. Several dozen have been trained and are carrying guns in the cockpit.

Rep. John Mica, R-Fla., chairman of the House aviation subcommittee, supports whatever means are necessary to ensure the safety and security of the flying public, said his spokesman, Gary Burns.

John Mazor, spokesman for the Air Line Pilots Association, said stun guns can make a cockpit more secure but are no replacement for lethal weapons.

"Our main concern is that we don't want it to be transformed into a replacement for arming pilots," Mazor said.

Last Friday, the TSA sent Congress the report saying stun guns could be allowed. Johnson said the look at stun guns was part of a study of all kinds of non-lethal weapons, including chemical systems.

"Basically, we opened James Bond's closet and took a look at everything in it to see what would be appropriate to put on board an aircraft in the name of security," Johnson said. "Electronic shock devices were the only technology that would improve our ability."

A study last year by the National Institute of Justice found that such weapons could allow flight crews to stop hijackings, but more tests were needed.

Johnson said the TSA still is working out the details of the United and Mesa proposals before giving them the OK.

"The airlines should see this report as a positive step forward and can expect a decision on their proposal soon," he said. "We're confident we will be able to resolve these questions."