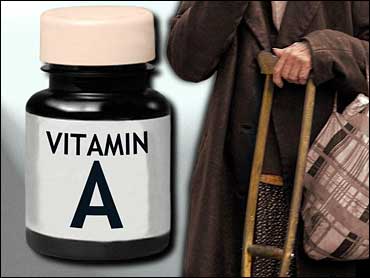 Taking vitamin A supplements can weaken the bones and increase the risk of fractures up to seven times, according to a large Swedish study.

The research, conducted on men, confirms three earlier studies in women showing that high intake of vitamin A raises the risk of broken hips and weak bones. The latest study is the first to measure levels of the vitamin in blood, rather than just asking about diet and supplement use.

The three-decade study and other evidence suggest that daily vitamin A consumption of more than 1.5 milligrams can be dangerous, and that most people should not take vitamin A supplements.

Current dietary recommendations call for only 0.7 mg of vitamin A for women and 0.9 mg for men a day. That is easily supplied by a healthy diet. But many popular multivitamins contain 0.75 mg to 1.5 mg of vitamin A, generally listed on labels as 2,500 international units and 5,000 IUs, respectively.

"Vitamin A is potentially harmful," said Dr. Donald Louria, chairman emeritus of preventive medicine at the University of Medicine and Dentistry of New Jersey in Newark, N.J. "Unless there is a known medical reason like certain diseases of the eye, people should not be taking vitamin A supplements."

The study by doctors at University Hospital in Uppsala was reported in Thursday's New England Journal of Medicine. It involved 2,322 men.

Vitamin A is known as an antioxidant. Antioxidants are believed to reduce the risk of cancer and heart disease. Government studies show one-third to one-half of Americans take vitamin A or multivitamins containing it.

In the study, about one-fifth, or roughly 465 of the men, were found to be at risk because they had the highest levels of vitamin A. The men were about 2½ times more likely to break a hip and 65 percent more likely to suffer any fracture than those with lower levels of the vitamin in their blood.

Those in the 99th percentile were about seven times more likely to break a bone.

Louria said that people should not take fish oil supplements or eat liver more than once a week, but that multivitamins containing 0.1 mg or less of vitamin A are fine for people eating a healthy diet.

Large amounts of vitamin A are found in beef liver and fish liver oils; smaller amounts are in egg yolks, butter and cream. Milk and some cereals are fortified with vitamin A and, per serving, provide about 10 percent of daily needs. And substances in dark green, leafy vegetables and yellow vegetables and fruits are converted to vitamin A in the body.

Annette Dickinson, acting president of the trade group for supplement makers, the Council for Responsible Nutrition, said the Swedish men had an unusually high intake of vitamin A, even though very few were taking supplements.

"I don't think there's a reason now from the studies we have before us to say that multivitamins containing ordinary amounts of vitamin A are harmful," Dickinson said. She said that in many multivitamins, much of the vitamin A is in the form of beta-carotene, which studies have shown does not weaken bones.

The study had some shortcomings: Blood levels of vitamin A were measured only once, and the participants' reports of diet and supplement use 20 years later did not match well with their earlier vitamin A blood levels.