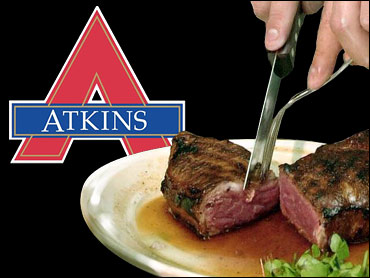 The Atkins diet may have proved itself after all: A low-carb diet and a Mediterranean-style regimen helped people lose more weight than a traditional low-fat diet in one of the longest and largest studies to compare the dueling weight-loss techniques.

A bigger surprise: The low-carb diet improved cholesterol more than the other two. Some critics had predicted the opposite.

"It is a vindication," said Abby Bloch of the Dr. Robert C. and Veronica Atkins Foundation, a philanthropy group that honors the Atkins' diet's creator and was the study's main funder.

However, all three approaches - the low-carb diet, a low-fat diet and a so-called Mediterranean diet - achieved weight loss and improved cholesterol.

The study is remarkable not only because it lasted two years, much longer than most, but also because of the huge proportion of people who stuck with the diets - 85 percent.

Researchers approached the Atkins Foundation with the idea for the study. But the foundation played no role in the study's design or reporting of the results, said the lead author, Iris Shai of Ben-Gurion University of the Negev.

Other experts said the study - being published Thursday in the New England Journal of Medicine - was highly credible.

"This is a very good group of researchers," said Kelly Brownell, director of Yale University's Rudd Center for Food Policy and Obesity.

The research was done in a controlled environment - an isolated nuclear research facility in Israel. The 322 participants got their main meal of the day, lunch, at a central cafeteria.

"The workers can't easily just go out to lunch at a nearby Subway or McDonald's," said Dr. Meir Stampfer, the study's senior author and a professor of epidemiology and nutrition at the Harvard School of Public Health.

In the cafeteria, the appropriate foods for each diet were identified with colored dots, using red for low-fat, green for Mediterranean and blue for low-carb.

As for breakfast and dinner, the dieters were counseled on how to stick to their eating plans and were asked to fill out questionnaires on what they ate, Stampfer said.

The low-fat diet - no more than 30 percent of calories from fat -- restricted calories and cholesterol and focused on low-fat grains, vegetables and fruits as options. The Mediterranean diet had similar calorie, fat and cholesterol restrictions, emphasizing poultry, fish, olive oil and nuts.

The low-carb diet set limits for carbohydrates, but none for calories or fat. It urged dieters to choose vegetarian sources of fat and protein.

"So not a lot of butter and eggs and cream," said Madelyn Fernstrom, a University of Pittsburgh Medical Center weight management expert who reviewed the study but was not involved in it.

Most of the participants were men; all men and women in the study got roughly equal amounts of exercise, the study's authors said.

Average weight loss for those in the low-carb group was 10.3 pounds after two years. Those in the Mediterranean diet lost 10 pounds, and those on the low-fat regimen dropped 6.5.

More surprising were the measures of cholesterol. Critics have long acknowledged that an Atkins-style diet could help people lose weight but feared that over the long term, it may drive up cholesterol because it allows more fat.

But the low-carb approach seemed to trigger the most improvement in several cholesterol measures, including the ratio of total cholesterol to HDL, the "good" cholesterol. For example, someone with total cholesterol of 200 and an HDL of 50 would have a ratio of 4 to 1. The optimum ratio is 3.5 to 1, according to the American Heart Association.

Doctors see that ratio as a sign of a patient's risk for hardening of the arteries. "You want that low," Stampfer said.

The ratio declined by 20 percent in people on the low-carb diet, compared to 16 percent in those on the Mediterranean and 12 percent in low-fat dieters.

The study is not the first to offer a favorable comparison of an Atkins-like diet. Research published in the Journal of the American Medical Association last year found overweight women on the Atkins plan had slightly better blood pressure and cholesterol readings than those on the low-carb Zone diet, the low-fat Ornish diet and a low-fat diet that followed U.S. government guidelines.

The heart association has long recommended low-fat diets to reduce heart risks, but some of its leaders have noted the Mediterranean diet has also proven safe and effective.

The heart association recommends a low-fat diet even more restrictive than the one in the study, said Dr. Robert Eckel, the association's past president who is a professor of medicine at the University of Colorado-Denver.

It does not recommend the Atkins diet. However, a low-carb approach is consistent with heart association guidelines so long as there are limitations on the kinds of saturated fats often consumed by people on the Atkins diet, Eckel said.

The new study's results favored the Atkins-like approach less when subgroups such as diabetics and women were examined.

Among the 45 women, those on the Mediterranean diet lost the most weight.

This study may lead doctors to start personalizing diets depending on what kinds of problems patients have, reports LaPook.

"I think these data suggest that men may be much more responsive to a diet in which there are clear limits on what foods can be consumed," such as an Atkins-like diet, said Dr. William Dietz, of the Centers for Disease Control and Prevention.

"It suggests that because women have had more experience dieting or losing weight, they're more capable of implementing a more complicated diet," said Dietz, who heads CDC's nutrition unit.