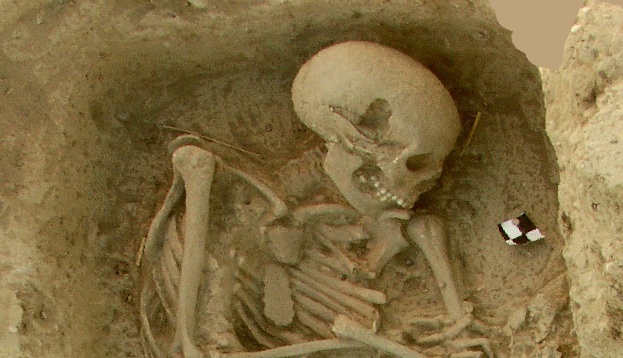 BERLIN -- Stone Age people from the Aegean Sea region moved into central and southern Europe some 8,000 years ago and introduced agriculture to a continent still dominated at the time by hunter-gatherers, scientists say.

The findings are based on genetic samples from ancient farming communities in Germany, Hungary and Spain. By comparing these with ancient genomes found at sites in Greece and northwest Turkey, where agriculture was practiced centuries earlier, researchers were able to draw a genetic line linking the European and Aegean populations.

The study challenges the notion that farming simply spread from one population to another through cultural diffusion. The findings were published Monday in the Proceedings of the National Academy of Science.

Joachim Burger, one of the study's authors, said genetic analyses of the samples showed that the ancient farmers in central Europe and Spain were more closely related to the Aegean group than to each other. This suggests that farmers came in two separate waves -- northward into the continent and westward along the coastline to Spain.

"One is the Balkan route and one is the Mediterranean route, as we know it also from migration of today," said Burger, an anthropologist and population geneticist at Johannes Gutenberg University in Mainz, Germany.

Researchers were also able to deduce some characteristics of the ancient Aegean farmers based on their DNA, he said. They were relatively fair-skinned with dark eyes and didn't yet have the genes necessary to digest milk after childhood -- a trait that only developed in Europe later.

The Aegean farmers also appeared to be closely related to Oetzi the Iceman, whose well-preserved remains were found on a glacier on the border between Austria and Italy.

Finally, by comparing the ancient samples to those of modern-day Europeans, the scientists found that the ancient farmers weren't their direct ancestors. These ancestors also include the hunter-gatherers, who eventually mixed with the newcomers and a third population thought to have arrived in Europe from the eastern steppes about 5,000 years ago.

An expert not involved with the study said it was "solid and well done," but cautioned that some of its conclusions were based on limited data.

"Small statistical effects might be (a) fluke," said Michael Hofreiter, an evolutionary geneticist at the University of Potsdam, Germany.

But the insight into Europe's Stone Age migration offered by the study was valuable, Hofreiter said.

"It adds to our knowledge about human history. And I think it is always valuable to replace speculation by factual evidence," he said.

Burger said researchers will now investigate whether the Aegean farmers can be linked directly to populations further southeast in the Fertile Crescent stretching from Syria to southwest Iran, where agriculture is known to have first emerged more than 10,000 years ago.