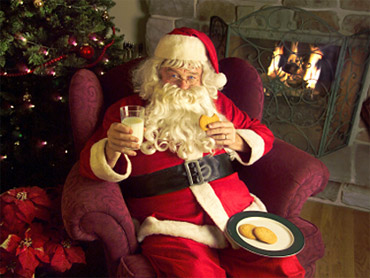 Yes, Virginia, there really is a Santa Claus. And he's a public health menace.

Public health expert Nathan Grills of Monash University in Australia says the beloved Christmas icon should ditch his sleigh and start biking or walking to lose his jelly belly.

After conducting a literature review, Grills identified a "very high Santa awareness" among children. He determined that Santa made a reckless role model, noting his frequent cookie snacks, occasional cigars and refusal to don a helmet during "extreme sports such as roof surfing and chimney jumping."

"Santa is a late adopter of evidence-based behavior change and continues to sport a rotund, sedentary image," Grills wrote.

He also found a correlation between countries that celebrate Santa and large numbers of fat children.

"Santa promotes a message that obesity is synonymous with cheerfulness and joviality," Grills wrote. He suggested that jolly old Saint Nick should swap his traditional snacks of cookies and milk in favor of sharing carrots with Rudolph.

"Unsuspecting little Johnny gets to sit on Santa's lap, but as well as his present, he gets H1N1 influenza," Grills warned.

Grills said he donned a Santa suit himself - and deemed the experience a public health nightmare. "I was kissed and hugged by snotty-nosed kids at each performance and was never offered alcohol swabs to wipe my rosy cheeks between clients," he wrote.

Efforts are underway to get the coronavirus vaccine to people in developing countries. UNICEF is helping lead the charge for the global COVAX rollout in places like Africa, the Middle East and Asia. Lana Zak spoke with Michael Nyenhuis, president and CEO of UNICEF, USA, about the humanitarian mission.