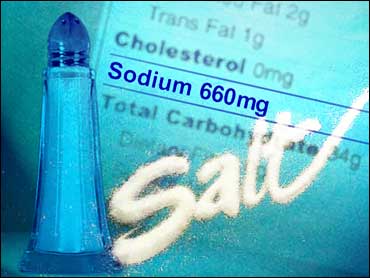 A high-salt diet isn't just bad for your blood pressure — it could trigger an ulcer or even increase the risk of gastric cancer, new lab studies suggest.

Why? Salt apparently riles up the poorly understood bacteria known as
Helicobacter pylori. The H. pylori bug causes the vast majority of stomach and duodenal ulcers — and greatly increases a person's risk of gastric cancer and a form of lymphoma called MALT.

D. Scott Merrell, Ph.D., Hanan Gancz, Ph.D., and colleagues at the Uniformed University of the Health Sciences in Bethesda, Md., note that people who eat a lot of salty food seem to get more severe stomach diseases than other people. When they exposed H. pylori cultures to salt, the bugs got stressed out.

The salt-exposed H. pylori pumped up the action of virulence genes. The more active these genes are, researchers suspect, the more dangerous the bacteria.

"The obvious implication is that decreasing the amount of salt in our diet would reduce our chances, if we are infected with H. pylori, of developing severe gastric disease," Merrell tells WebMD. "Our next step is to find which H. pylori genes are needed to survive in the environment. If we can find them, they might be good targets for a therapeutic drug."

Merrell and Gancz reported the findings at this month's annual meeting of the American Society for Microbiology in Toronto.

Gastroenterologist Lawrence Saubermann, M.D., of the University of Rochester, N.Y., notes that H. pylori is a common infection. For reasons still not understood, most people infected with the bug never develop ulcers or H. pylori-related cancers.

"Nobody can predict whether the organism will cause disease," Saubermann tells WebMD. "There are those who have H. pylori all their lives and have no trouble. What causes some people to develop complications from it is not clear."

Doctors don't usually test patients for H. pylori infection unless a person shows signs of having an ulcer. But if the infection is detected, patients usually receive treatment. Treatment means using at least two strong antibiotics and a double-strength antacid pill.

That's a little bit scary, as doctors expect that with more and more people getting treated, antibiotic-resistant H. pylori strains will appear. This is why Saubermann hopes that Merrell, Gancz, and other researchers succeed in finding out why — and when — H. pylori starts causing disease.