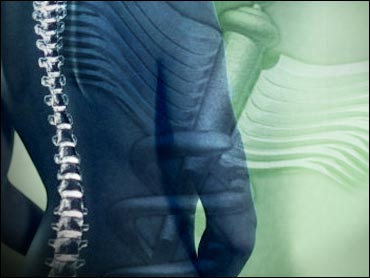 Many adolescents diagnosed with spine curvatures can skip braces, surgery or other treatments without developing debilitating physical impairments later in life, a 50-year study suggests.

Previous research presented a grim prognosis and led to mandatory school screening programs in 26 states, based on the misperception that spine deformities inevitably lead to severe, even life-threatening disabilities.

Untreated patients did have more back pain and more body-image concerns than study participants with normal spines and three deaths were considered possibly linked to the deformity.

But untreated patients had similar death rates and were just as functional and likely to lead productive lives 50 years after diagnosis as people with normal spines.

"The bottom line is most patients are doing very well," said lead author Dr. Stuart Weinstein, an orthopedic surgery professor at the University of Iowa.

The study's results are based on 50 years of follow-up information on 117 patients diagnosed with scoliosis between 1932 and 1948. They appear in Wednesday's Journal of the American Medical Association.

Dr. Paul Sponseller, a Johns Hopkins University orthopedics specialist who wrote an accompanying editorial in JAMA, said it is unclear whether today's image-conscious adolescents would accept deformity without treatment.

Still, Sponseller said school screening programs often result in "over-referrals" for treatment, and he suggested the study could lead to more effective screening focusing on youngsters with the most critical need.

The study involved a spine curvature that develops after age 10, runs in families and has no known cause. Formally called late-onset idiopathic scoliosis, it has been estimated to affect at least 2 percent of Americans, including about 60,000 adolescents.

A normal spine looks like a straight line down the middle of the back when viewed from behind. But in patients with scoliosis, the spine may have a noticeable "S" or "C" shape and the shoulders and sides of the waist may appear uneven.

Severely curved spines can encroach on the chest cavity and interfere with normal heart and lung function, but the study suggests those cases are rare.

Modern treatments — surgery to correct curves of about 50 degrees or more, or back braces to prevent worsening in less severe cases — were not available at the study's outset, Weinstein said.

When the spine stops growing, the average curve of scoliosis patients studied was about 50 degrees, and most got worse throughout adulthood.

The study participants were among 444 people diagnosed beginning in the early 1930s. Some were not eligible for follow-up or died; the authors also were not able to interview 127 patients and lacked information on cause of death in several patients. Weinstein said he does not believe that affected the results.