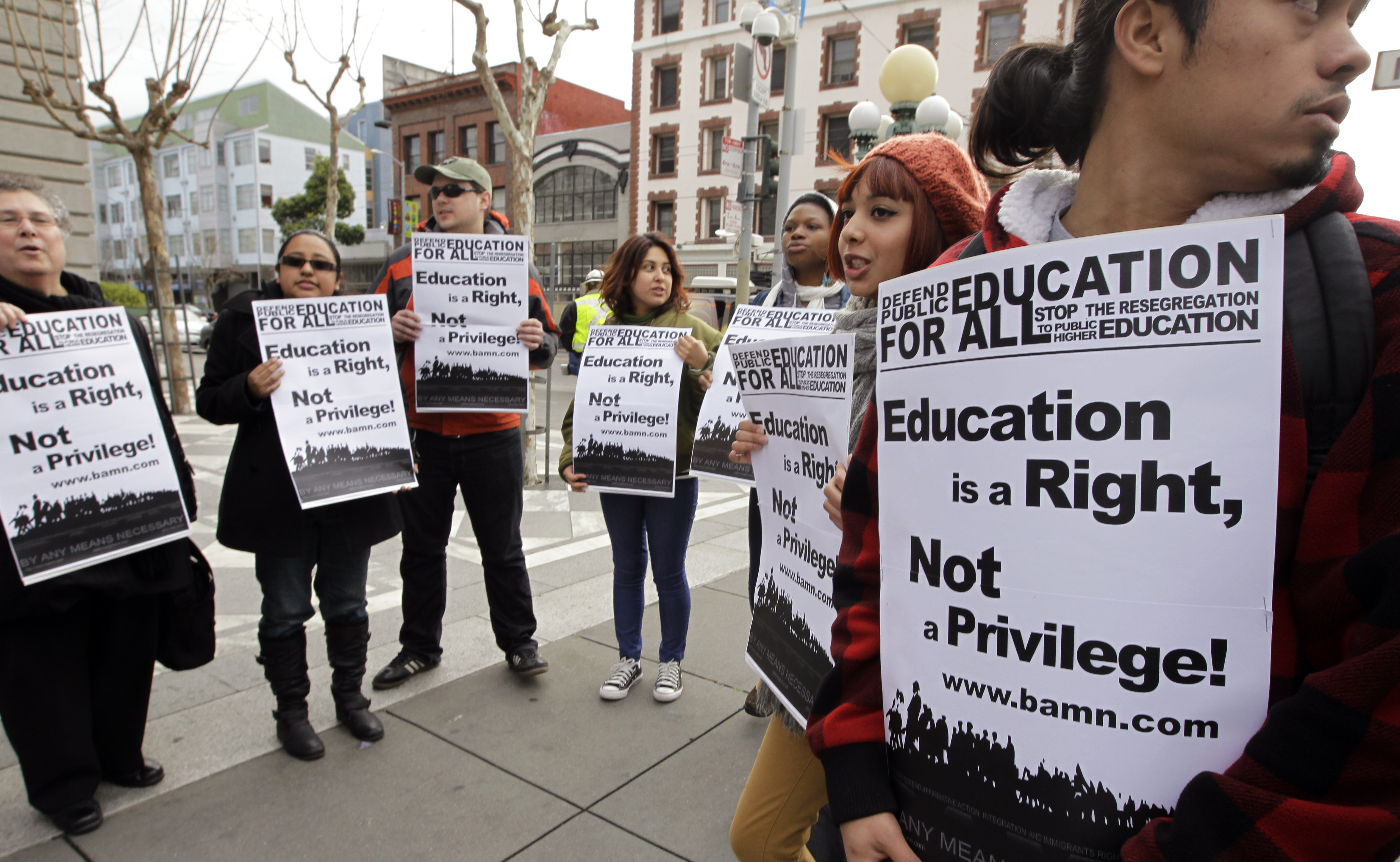 As the Supreme Court revisits the use of race in college admissions next week, critics of affirmative action are hopeful the justices will roll back the practice. A new report out Wednesday offers a big reason for their optimism: evidence from at least some of the nine states that don't use affirmative action that leading public universities can bring meaningful diversity to their campuses through race-neutral means.

That conclusion is vigorously disputed by supporters of race-based affirmative action, including universities in states like California which cannot under state law factor race into admissions decisions. The new report, by the Richard Kahlenberg, a senior fellow at the Century Foundation and prominent advocate of class-based affirmative action, calls those states' race-neutral policies largely successful. The University of California and others call them a failure that's left their campuses inadequately representative of the states they serve.

Kahlenberg also acknowledges that highly selective universities like UCLA and the Universities of California-Berkeley and Michigan haven't recovered from drop-offs in minority enrollments after voters in those states outlawed racial preferences.

But in most places, the report argues, a combination of measures — aggressive outreach, de-emphasizing of standardized tests, affirmative action based on class instead of race, and even getting rid of legacy preferences that mostly benefit whites — has allowed minority representation on their campuses to recover to previous levels.

Seven states have banned racial preferences in admissions outright — Washington, Michigan, Nebraska, Arizona, New Hampshire, California and Florida. In Texas and Georgia leading public universities use a race-neutral system, though the University of Texas has maintained some use of affirmative action. It's that policy at UT that's now before the court in a case brought by Abigail Fisher, a rejected white applicant. Arguments are next Wednesday.

In its last two major affirmative action decisions, in 1978 and 2003, the court essentially took universities at their word when they argued it's impossible to achieve adequate racial diversity without factoring race into admissions. But in the 2003 decision, involving the University of Michigan, the court also indicated it would pay close attention to race-neutral experiments in the states to make sure racial preferences were really necessary to achieve diversity.

This time around, the swing vote is likely Justice Anthony Kennedy, who dissented in the case nine years ago, precisely because he believed colleges need to try harder to achieve diversity by other means before resorting to racial preferences.

"It's the central question in Fisher: whether race-neutral alternatives will work," Kahlenberg said.

Kahlenberg says the state data, compiled by Halley Potter, shows they do.

In Texas, diversity numbers plummeted during a period in the late 1990s when the university wasn't using affirmative action. The state implemented a "Top 10 percent" plan granting automatic admission to top high school students based on class rank, and its enrollment of underrepresented minorities has risen overall.

But supporters of affirmative action draw different lessons from the experiences of the states trying race-neutral methods. For one thing, they note states like California, Florida and Texas are much more diverse now, so holding minority numbers steady isn't progress. UT, which now uses race as a factor for a small part of its class, argues the Top 10 percent plan failed to provide sufficient diversity, noting blacks remain underrepresented and many classrooms lack minority voices.

"If there were a better way we'd love to see it happen, but we haven't," Hilary Shelton, senior vice president for policy and advocacy at the NAACP, said of race-neutral alternatives to ensuring minorities are represented at leading colleges ."What we keep seeing happen is when these programs are stripped away we end up doing much worse in the areas of integration."

The nearly 100 briefs filed in the Fisher case also include several from social science researchers arguing race-neutral alternatives don't work. In its brief supporting Texas, the University of California argues that when state voters ended affirmative action in 1996, it was unable to enroll a critical mass of black students, particularly the two most prominent campuses — Berkeley and UCLA.

California spent tens of millions of dollars expanding outreach, de-emphasized standardized tests and even implemented a policy similar to Texas' Top 10 percent plan, the university told the court. But the results weren't satisfactory. In 1995, black students accounted for 7.3 percent of admitted freshmen at Berkeley and 6.7 percent at UCLA; the figures today are 3.9 percent and 3.8 percent, respectively.

Highly selective institutions like Berkeley and UCLA generate a disproportionate share of future leaders, Orfield says, and are key pathways to professional and graduate schools. Without using race in admissions, such universities will look hardly anything like the states they're supposed to serve, and minority students won't have access to critical opportunities.

Were the court to force colleges nationwide to try race-neutral programs "it would just make a bad situation worse," he said.

Kahlenberg agrees low minority enrollments at elite institutions as a problem. But he says at all but the most selective universities, race-neutral alternatives have produced at least as much diversity as policies that considered race. And at the most elite, like Berkeley, a blanket ban on using race would solve the problem because those schools would no longer lose so many minority applicants to top private colleges that can use race.

To Kahlenberg, the arguments all point to affirmative action based on class, not race. Even President Barack Obama, he notes, has said that his own daughters shouldn't receive preferences because of their race.

"It's far easier for universities to provide a racial preference that brings in upper-middle class students of color," he said, than to spend money on financial aid and support services for low-income students of any race.