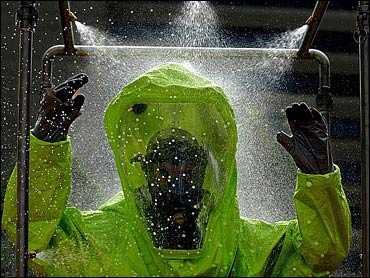 Nearly two years after the Sept. 11 attacks, the United States remains "dangerously unprepared" to handle another catastrophic attack, according to a study by the Council on Foreign Relations.
The government says it already has done some of what the council suggested and is working on other recommendations.

The report said the main problem is that emergency responders on the front lines — police, fire, public health and other officials — are drastically underfinanced and lack the equipment or training they need.

The council, a New York-based private world affairs advocacy organization, recommended spending $98 billion beyond the $27 billion it said the federal government planned to spend on first responders over the next five years.

Gordon Johndroe, a spokesman for the Department of Homeland Security, said Sunday that the conclusion that an additional $98 billion is needed for first responders is "grossly inflated." He said officials already have implemented or are in the process of putting in effect others of the report's suggestions.

Homeland Security Director Tom Ridge insisted the U.S. is far more secure than it was two years ago, and it is not a question of how much money is available, but how it is a spent.

At a ceremony in Washington swearing in a new advisory council for his department, Ridge said there is no way to guarantee a "fail safe" program to prevent another Sept. 11 terror attack.

However, Ridge stressed his department has made much progress in its first 100 days in operation.

Rudman said the government must take immediate steps to ensure that the nation's emergency officials are prepared to respond to a chemical, biological or radiological attack.

"We are dealing with the possibility of tens of thousands of casualties. And we must deal with it. This is not a question of, `Can we?' It's a question of we must," Rudman said Sunday on NBC's "Meet the Press."

Metzl, also appearing on NBC, said police chiefs have complained about the lack of protective suits, and health officials do not have the resources they need to analyze basic biological or chemical agents.

"There is a real danger," said Metzl.

The report found that, on average, fire departments across the country have only enough radios to equip half the firefighters on a shift and breathing apparatuses for only a third.