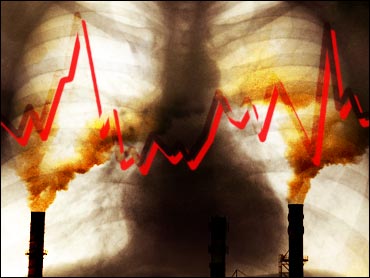 The fine grit in polluted air raises the risk of heart disease in older women much more powerfully than scientists realized, a big U.S.-funded study has found, raising questions of whether U.S. environmental standards are strict enough.

The U.S. Environmental Protection Agency tightened its daily limit for these tiny specks, known as fine particulates, in September. But it left the average annual limit untouched, allowing a concentration of 15 millionths of a gram for every cubic meter of air.

In the study of 65,893 women, the average exposure was 13 units, with two-thirds of the women falling under the national standard. But every increase of 10 units, starting at 0, raised the risk of fatal cardiovascular disease by about 75 percent. That is several times higher than in a study by the American Cancer Society.

"There was a lot of evidence previously suggesting that the long-term standard should be lower, and this is adding one more study to that evidence," said Douglas Dockery, a pollution specialist at the Harvard School of Public Health.

It has long been known that particulates can contribute to lung and heart disease, with women perhaps more susceptible than men to heart problems, perhaps because of their smaller blood vessels and other biological differences.

But the degree of risk for older women was less clear. The study started with women who had gone through menopause and were 50 to 79 years old.

Dockery wrote an accompanying editorial for the study, published in Thursday's New England Journal of Medicine. The University of Washington-based researchers worked from data collected for the Women's Health Initiative, a well-respected research project that previously showed the heart dangers of hormone supplements.

Researchers believe that when dirty air is inhaled, invisible pollutants can become embedded in the lungs or travel through the bloodstream, reports CBS News medical correspondent Dr. Jon LaPook. They may then harden arteries or cause inflammation leading to cardiac disease or stroke.

The pollutants are so small that it would take about 30 to equal the thickness of a human hair.

These particles — made of dust, soot and various chemicals — come from burning fuel in cars, factories and power plants. While individual particles are too small to see, they can be observed collectively as urban haze.

Unlike earlier studies, this one looked not just at deaths, but also at heart attacks, coronary disease, strokes and clogged arteries. The problems were 24 percent more likely with every 10-unit rise in particles. Almost 3 percent of the women suffered some kind of cardiovascular problem.

"It's important because it points to the fact that environmental factors are related to heart disease and that pollution is something that we all have to be concerned about," said study author Dr. Joel Kaufman of the University of Washington.

The risk varied along with the varying levels of these particles in different neighborhoods within the same city.

In their calculations, the researchers tried to adjust for lower income and other health problems that have been blamed for the higher rates of disease in past studies.

"I think the major contribution is answering the critics of the prior studies," Kaufman said. "The effect seems large and important and should be taken seriously."

States and other groups demanding a lower annual standard sued the EPA last year, accusing it of disregarding the advice of its own scientists. Some agency scientists are also pushing for tighter rules on ozone, the chemical that creates smog and contributes to asthma and lung disease.

"It's too soon to say how much weight any single study will have, but this study will be considered as part of this continuous process," said EPA spokesman John Millett.