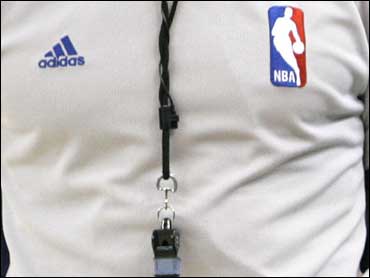 An academic study of NBA officiating found that white referees called fouls at a greater rate against black players than against white players, The New York Times reported in Wednesday's editions.

The study by a University of Pennsylvania assistant professor and Cornell graduate student also found that black officials called fouls more frequently against white players than black, but noted that that tendency was not as pronounced.

Justin Wolfers, an assistant professor of business and public policy at Penn's Wharton School, and Joseph Price, a Cornell graduate student in economics, said the difference in calls "is large enough that the probability of a team winning is noticeably affected by the racial composition of the refereeing crew."

The study, conducted over a 13-season span through 2004, found that the racial makeup of a three-man officiating crew affected calls by up to 4½ percent.

The NBA strongly criticized the study, which was based on information from publicly available box scores, which show only the referees' names and contain no information about which official made a call.

"The study that is cited in the New York Times article is wrong," president of league and basketball operations Joel Litvin told The Associated Press on Tuesday night. "The fact is there is no evidence of racial bias in foul calls made by NBA officials and that is based on a study conducted by our experts who looked at data that was far more robust and current than the data relied upon by Professor Wolfers.

"The short of it is Wolfers and Price only looked at calls made by three-man crews. Our experts were able to analyze calls made by individual referees."

However, three independent experts asked to review the study by Wolfers and Price for the Times said the argument the two academics make is stronger.

"I would be more surprised if it didn't exist," Ian Ayres of Yale Law School and one of the Times' experts, said of the suggested racial bias.

Litvin said the NBA's study, using data from November 2004 to January 2007, included some 148,000 calls and included which official made each call. The Times said the NBA denied a request by Wolfers and Price to obtain that information, citing its confidentiality agreement with the officials.

The study also found differences in everything from a decrease in scoring to a rise in turnovers depending on the officials' race.

"Player-performance appears to deteriorate at every margin when officiated by a larger fraction of opposite-race referees," Wolfers and Price wrote.

But the key finding was in regard to foul calls, saying "black players receive around 0.12-0.20 more fouls per 48 minutes played (an increase of 2½-4½ percent) when the number of white referees officiating a game increases from zero to three."

The NBA has an observer at each game and closely monitors its officials, who are required to file reports after each game they work and are expected to be able to explain each potentially controversial call they have made.

Litvin said in an original version of the paper, dated March 2006, Wolfers and Price came to the conclusion that there was no bias. He added that the NBA's research "all prove beyond any doubt in our minds that these guys are just flat wrong."

"They reached conclusions in their own papers that are unsupported by their own calculations," Litvin said.

Wolfers and Price are set to present the paper at meetings of the Society of Labor Economists on Friday and the American Law and Economics Association on Sunday. The Times said they will then submit it to the National Bureau of Economic Research and for formal peer review before consideration by an economic journal.