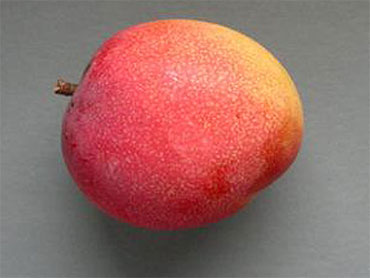 This story was written by Texas A&M researchers. It was originally published on the univerity's Web site, AgriLIFE.org.


Mango. If you know little about this fruit, understand this: It's been found to prevent or stop certain colon and breast cancer cells in the lab.

That's according to a new study by Texas AgriLife Research food scientists, who examined the five varieties most common in the U.S.: Kent, Francine, Ataulfo, Tommy/Atkins and Haden.

Though the mango is an ancient fruit heavily consumed in many parts of the world, little has been known about its health aspects. The National Mango Board commissioned a variety of studies with several U.S. researchers to help determine its nutritional value.

"If you look at what people currently perceive as a superfood, people think of high antioxidant capacity, and mango is not quite there," said Dr. Susanne Talcott, who with her husband, Dr. Steve Talcott, conducted the study on cancer cells. "In comparison with antioxidants in blueberry, acai and pomegranate, it's not even close."

"It has about four to five times less antioxidant capacity than an average wine grape, and it still holds up fairly well in anticancer activity. If you look at it from the physiological and nutritional standpoint, taking everything together, it would be a high-ranking super food," she said. "It would be good to include mangoes as part of the regular diet."

The Talcotts tested mango polyphenol extracts in vitro on colon, breast, lung, leukemia and prostate cancers. Polyphenols are natural substances in plants and are associated with a variety of compounds known to promote good health.

Mango showed some impact on lung, leukemia and prostate cancers but was most effective on the most common breast and colon cancers.

"What we found is that not all cell lines are sensitive to the same extent to an anticancer agent," she said. "But the breast and colon cancer lines underwent apotosis, or programmed cell death. Additionally, we found that when we tested normal colon cells side by side with the colon cancer cells, that the mango polyphenolics did not harm the normal cells."

"We found the normal cells weren't killed, so mango is not expected to be damaging in the body," she said. "That is a general observation for any natural agent, that they target cancer cells and leave the healthy cells alone, in reasonable concentrations at least."

The Talcotts evaluated polyphenolics, and more specifically gallotannins as being the class of bioactive compounds (responsible for preventing or stopping cancer cells). Tannins are polyphenols that are often bitter or drying and found in such common foods as grape seed, wine and tea.

The study found that the cell cycle, which is the division cells go through, was interrupted. This is crucial information, Suzanne Talcott said, because it indicates a possible mechanism for how the cancer cells are prevented or stopped.

"For cells that may be on the verge of mutating or being damaged, mango polyphenolics prevent this kind of damage," she said.

The Talcotts hope to do a small clinical trial with individuals who have increased inflamation in their intestines with a higher risk for cancer.

According to the National Mango Board, based in Winter Park, Fla., most mangoes consumed in the U.S. are produced in Mexico, Ecuador, Peru, Brazil, Guatemala and Haiti. Mangoes are native to southeast Asia and India and are produced in tropical climates. They were introduced to the U.S. in the late 1800s, and a few commercial acres still exist in California and Florida.
© 2010 Texas A&M University. All rights reserved