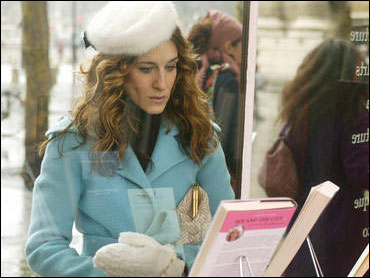 Groundbreaking research suggests that pregnancy rates are much higher among teens who watch a lot of TV with sexual dialogue and behavior than among those who have tamer viewing tastes.

"Sex and the City," anyone? That was one of the shows used in the research.

The new study is the first to link those viewing habits with teen pregnancy, said lead author Anita Chandra, a Rand Corp. behavioral scientist. Teens who watched the raciest shows were twice as likely to become pregnant over the next three years as those who watched few such programs.

Previous research by some of the same scientists had already found that watching lots of sex on TV can influence teens to have sex at earlier ages.

Shows that highlight only the positive aspects of sexual behavior without the risks can lead teens to have unprotected sex "before they're ready to make responsible and informed decisions," Chandra said.

The study was released Monday in the November issue of Pediatrics. It involved 2,003 12- to 17-year-old girls and boys nationwide questioned by telephone about their TV viewing habits in 2001. Teens were re-interviewed twice, the last time in 2004, and asked about pregnancy. Among girls, 58 became pregnant during the follow-up, and among boys, 33 said they had gotten a girl pregnant.

Participants were asked how often they watched any of more than 20 TV shows popular among teens at the time or which were found to have lots of sexual content. The programs included "Sex and the City," "That '70s Show" and "Friends."

Chandra said TV-watching was strongly connected with teen pregnancy even when other factors were considered, including grades, family structure and parents' education level.

But the study didn't adequately address other issues, such as self-esteem, family values and income, contends Elizabeth Schroeder, executive director of Answer, a teen sex education program based at Rutgers University.

"The media does have an impact, but we don't know the full extent of it because there are so many other factors," Schroeder said.

The question of whether a child's viewing habits in general affected pregnancy rates, mainly the total number of hours spent watching television - not just racy programming - was also not covered, as pointed out on CBS' The Early Show.

But Bill Albert, chief program officer at the nonprofit National Campaign to Prevent Teen Pregnancy, praised the study and said it "catches up with common sense."

"Media helps shape the social script for teenagers. Most parents know that. This is just good research to confirm that," Albert said.

Still, U.S. teen pregnancies were on a 15-year decline until a 3 percent rise in 2006, the latest data available. Experts think that could be just be a statistical blip.

And Albert noted that the downward trend occurred as TV shows were becoming more sexualized, confirming that "it's not the only influence."

Psychologist David Walsh, president of the National Institute on Media and the Family, cited data suggesting only about 19 percent of American teens say they can talk openly with a trusted adult about sex. With many schools not offering sex education, that leaves the media to serve as a sex educator, he said.

"For a kid who no one's talking to about sex, and then he watches sitcoms on TV where sex is presented as this is what the cool people do," the outcome is obvious, Walsh said.

He said the message to parents is to talk to their kids about sex long before children are teens. Parents also should be watching what their kids watch and helping filter messages sex-filled shows are sending, he said.