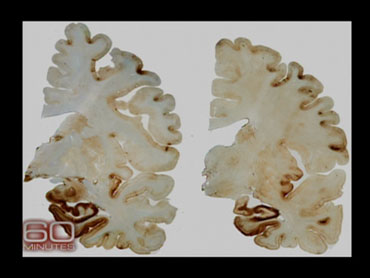 You can't separate violence from football - it's part of the thrill of the game. Players know what they're risking when they hit the field, including injuries such as torn ligaments and broken bones. But what about a blow to the brain? According to the Centers for Disease Control, concussions from sports are an epidemic in this country.

As many as three million sports related concussions happen every year.

And new research shows that their effects can be frighteningly long-lasting, even leading to permanent brain damage and the early onset of dementia. While concussions happen in many sports, most happen in football. They can happen to kids, to the pros, and as we saw recently, to one of today's top college players.

Two weeks ago, everything was going right for Tim Tebow, the best college quarterback in the country. His team, the Florida Gators, was coasting to victory and Tebow seemed invincible, until he took a hit.

Tebow suffered a concussion, meaning his brain went slamming into his skull, causing a disruption in normal brain activity. He spent a night at the hospital and wasn't allowed back on the field for 10 days.

Multiple concussions have ended the careers of other star players, including NFL Hall of Fame quarterbacks Steve Young of the San Francisco 49ers, Troy Aikman of the Dallas Cowboys, and three-time Super Bowl champ linebacker, Ted Johnson from the New England Patriots.

Johnson was such a hard hitter, that in one play he ran into an opponent with so much power, he cracked the other guy's helmet in two.

By Johnson's own estimate, he suffered more than 50 concussions, but kept on playing even though he sometimes couldn't remember the plays and had trouble seeing.

"Lot of times, if I didn't get my vision back before the next snap, I'd have to have another linebacker call the plays. I couldn't see on the sideline. I couldn't see my defensive coordinator signaling in 'cause my vision was still blurred," Johnson told 60 Minutes correspondent Bob Simon.

But he kept playing, suffering a concussion and getting right back onto the field. Asked why he did that, Johnson said, "Well, I didn't know any better."

"But you weren't that worried about it at the time?" Simon asked.

"I wasn't as worried as maybe I could've been if I knew what the potential risks," Johnson replied.

Much of the information about those risks has come out only recently. The University of North Carolina studied retired NFL players and found a correlation between the number of concussions and the onset of dementia and depression, something Ted Johnson was suffering from when he retired four years ago.

"I was in bed with no contact with anybody, curtains drawn. I would get up, go eat, go back to bed. That was my routine for a long, long time," Johnson said.

Asked how long, Johnson told Simon, "Close to a year and a half."

Dr. Robert Cantu, a neurosurgeon, who co-authored the University of North Carolina study, treated Johnson and says he believes Johnson is suffering from brain damage.

"A large segment of society thinks that concussions are innocuous and everybody recovers from them, and in life is gonna be merry ever after," Dr. Cantu said.

But Cantu said that notion is not true at all.

"When pro football players collide, how great is the impact?" Simon asked.

"The impacts can be tremendous, because athletes can run almost 20 miles an hour, and their size and their weight would be equivalent to crashing a car into a brick wall going 40, 45 miles an hour," Cantu explained.

Too much of that causes brain damage you can actually see.

Dr. Ann McKee, a neuropathologist at Boston University School of Medicine, has been working on a brand new area of research on the brain that has provided physiological proof of brain disease in athletes who have suffered concussions.

A brain sample she showed to Simon was from Walter Hilgenberg, a former Minnesota Viking who died last year of Lou Gehrig's disease at age 66.

His wife donated his brain to research because he had so many severe concussions during his career.

"We do have evidence that he did have trauma to his brain," McKee explained.

Dr. McKee says slides, cross-sections of his brain, show that Hilgenberg was suffering from a devastating, degenerative brain disease, called chronic traumatic encephalopathy, or CTE. It was first seen in boxers and can only be diagnosed after death, when the brain is dissected.

Looking at the cross-section slides of the brain, you can see it in the dark brown pigment, which shows an abnormal protein that kills off brain cells.

"A normal brain, that is, an individual that has had, does not have this injury or does not have any other condition, you shouldn't see any of this dark brown pigment," McKee explained.

"It would be completely white. None of this brown pigment would show up," she added.

But the darkened pattern on the brain is only seen in trauma, McKee explained.

Just this year, Dr. McKee has examined the brains of 16 former athletes, including 11 football players.

The results were shocking: they all had the brain disease, CTE. Her research was published in a leading medical journal in the field.

"I've looked at brains from people that have lived to be 110. And you just don't see anything like this, what we see in these athletes," she told Simon

Even more troubling, she says, CTE actually progresses undetected for years, silently eating away at brain cells, until it causes dementia and other cognitive problems.

"It seems to be triggered by trauma that occurs in a person's youth; their teens, their 20s, even their 30s. But it doesn't show up for decades later," she explained. "People think it's a psychological disease or maybe an adjustment reaction, maybe a mid-life sort of crisis type of thing. But actually, they have structural disease. They have brain disease."

Dr. McKee's research found that athletes in any contact sport are at risk of permanent brain damage.

The National Football League commissioned a telephone survey of 1,000 retired players that was released just two weeks ago. The study found the players under the age of 50 were 19 times more likely to have been diagnosed with dementia, Alzheimer's and other memory related diseases, compared to the general public.

But the NFL has taken issue with its own findings, saying in depth clinical research needs to be done to verify the survey.

60 Minutes asked the NFL for an interview. They referred us to Dr. Andrew Tucker, a member of the NFL's brain injury committee and the team doctor for the Baltimore Ravens.

"Do you not believe that multiple concussions can lead to later life dementia, depression, etcetera?" Simon asked.

"It's a risk factor, probably, for something that can happen later in life. I think the majority of athletes that play collision sports suffer a couple or a few concussions in their career and don't have any problems later in life. Some do. And I think one of the greatest challenges for the medical profession is to try to identify the people that might have problems down the road," Dr. Tucker said.

And what about the brown brain damage that Dr. McKee is finding in dead athletes?

"The scientists who are involved in this study are convinced that the football playing that these guys were involved in caused the CTE. What's your opinion on that?" Simon asked.

"There are a few cases, isolated cases, that have been studied. There is something definitely there. What we're trying to figure out, 'Is trauma the only cause of those findings? Or are there other causes?'" Tucker said.

He told us the NFL is doing its own study into the issue and results are about a year away.

But the NFL has taken steps to make the game safer. Two years ago, for example, the league started requiring neurological testing for each player. It also handed out a pamphlet on concussions and banned some especially dangerous hits and maneuvers.

The league also cracked down on players who make illegal helmet-to-helmet hits, like one for which the Jets' Eric Smith was suspended and fined $50,000.

Asked if we're heading for a kinder, gentler form of football, Tucker said, "I think it's always going to be a physical game."

And at times, a spectacular one. In 1971, Baltimore Colts tight end John Mackey caught a pass from Johnny Unitas to score a 75-yard touchdown and help his team win the Super Bowl.

He suffered a concussion and many hard hits in his playing days, and today suffers from severe dementia. Mackey, now 68, is in an assisted living facility in Baltimore.

His wife, Sylvia, does everything to jog his memory. It's barely there. He comes to life ever so briefly when he throws that ball. She says he started showing signs of dementia when he was only in his early 50's, 20 years earlier than is usually the case.

Asked if her husband's condition is going to get worse, Sylvia Mackey said, "Yes. It's [a] slowly deteriorating disease. It has no cure."

She couldn't afford the high cost of her husband's medical bills, so she pleaded with the NFL for help. In response, the league created the "88 plan," named after Mackey's jersey number, which provides up to $88,000 a year to pay for care.

Mackey is one of about a hundred players with severe dementia receiving this financial aid.

Dr. Robert Cantu believes it will eventually be proven that the problems of Mackey and many of these players were caused by the hits they took on the field. "In reality, I suspect if their brains could be studied, and hopefully one day they will, that traumatic encephalopathy is what has caused this dementia," he said.

Dr. Cantu is even more worried about kids and concussions.

Last year, high school athletes reported having 150,000 concussions. Younger brains are more vulnerable to injury, doctors say, and unlike in the NFL, there's often no one on the sidelines trained to diagnose brain injuries.

That's what happened to Zackary Lystedt in 2006. He was 13 years old when he got a concussion, and fell to the field clutching his head. He sat out briefly, then his coaches sent him back in.

When the game was over, his father, Victor Lystedt, says Zackary was screaming in pain. "He's like, 'Daddy, my head, my head, it's killin' me, Dad. It's killin' me,'" Lystedt recalled.

Zackary remained in a coma for over a month. Three years later, he's in a wheelchair and spends at least 40 hours a week in therapy.

"All the kids right now at 16 are plannin' their dances. We're plannin' on just gettin' a little bit more movement so that my son can stand on his own, on his own two feet," Lystedt said.

This spring, Washington State passed "Zack's Law," which says that a young athlete showing any signs of a concussion must get medical approval before returning to play.

In an effort to make the game safer, several companies are developing new football helmets for added protection. One of them has shock absorbers inside, instead of the traditional foam to diffuse the impact of a hit.

But Ted Johnson believes it is unlikely that better equipment, or new rule changes alone, can fully protect athletes from the dangers of concussions.

"What would you say to young players going into the NFL today?" Simon asked.

Asked if he'd warn them about concussions, Johnson said, "I would, I would tell 'em about it. But my guess is they don't wanna hear it."

"If players play with fear, they're not gonna be very good players," he added.
Produced by Catherine Olian and Michael Radutzky