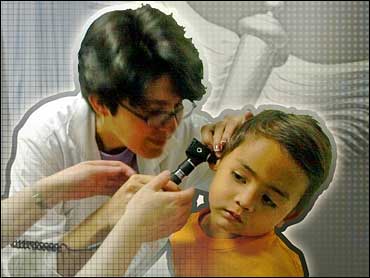 More than 75 percent of kids before the age of 5 have an ear infection, according to the Journal of the American Academy of Pediatrics. Ear infections have routinely been treated with antibiotics, but now, new research suggests the best medicine may be no medicine at all.

CBS News Medical Correspondent Dr. Jennifer Ashton said on "The Early Show" there's substantial evidence suggesting that many children with ear infections will get better without antibiotics and with no ill effects.

"It requires a lot of patience on the part of both the doctor and the parents to let it run its course. And most ear infections are caused by viruses, which don't get treated with antibiotics," she said. "But most will get better on their own."

Ashton said the American Academy of Pediatrics is about to update its guidelines, but essentially the current guidelines say that unless the child is very young or very sick, a doctor should employ "watchful waiting" -- monitoring the child's health. As a backup, the doctor might prescribe a safety net antibiotic prescription or SNAP to be filled only if the child has not improved within 48 to 72 hours. A recent study in the British Medical Journal has shown that treating with antibiotics can actually increase the chances of relapse and contrary to popular wisdom; about 80 percent of infections clear up without antibiotics.

However, Ashton said some children should still get antibiotics.

The current guidelines include children who:
• Are under age 2
• Appear seriously ill with fever of 102F or higher
• Have fluid dripping from the ears
• Have a double ear infection.

Ashton added there are some side effects to antibiotics use in kids. In about 10 to 20 percent of children, Ashton said, antibiotics can cause upset stomach, vomiting, diarrhea. Less frequently, they can cause rashes. The most serious side effect, she said, is antibiotic resistance.

"This will make the next bug tougher to treat," she said. "The next time your doctor goes to prescribe amoxicillin, the most commonly used for kids, it might not work."

According to new research -- despite all the science-based evidence -- doctors still prescribe antibiotics to kids they suspect with ear infections 84 percent of the time. However, Ashton said doctors and parents are slowly coming around to the fact that antibiotics may not be the best medicine.

"Pediatricians are now focusing on pain relief," Ashton said. "Children screaming in pain will not get relief from an antibiotic in the first 24 hours. They should be given ibuprofen (Advil) or acetaminophen (Tylenol), and sometimes prescription ear drops can ease the pain."