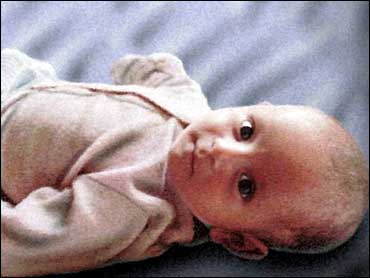 Even infants can tell the difference between naughty and nice playmates, and know which to choose, a new study finds.

Babies as young as 6 to 10 months old showed crucial social judging skills before they could talk, according to a study by researchers at Yale University's Infant Cognition Center published in Thursday's journal Nature.

The infants watched a googly-eyed wooden toy trying to climb roller-coaster hills and then another googly-eyed toy come by and either help it over the mountain or push it backward. They then were presented with the toys to see which they would play with.

Nearly every baby picked the helpful toy over the bad one.

The babies also chose neutral toys - ones that didn't help or hinder - over the naughty ones. And the babies chose the helping toys over the neutral ones.

"It's incredibly impressive that babies can do this," said Hamlin, a Yale psychology researcher. "It shows that we have these essential social skills occurring without much explicit teaching."

There was no difference in reaction between the boys and girls, but when the researchers took away the large eyes that made the toys somewhat lifelike, the babies didn't show the same social judging skills, Hamlin said.

The choice of nice over naughty follows a school of thought that humans have some innate social abilities, not just those learned from their parents.

"We know that they're very, very social beings from very, very early on," Hamlin said.

A study last year out of Germany showed that babies as young as 18 months old overwhelmingly helped out when they could, such as by picking up toys that researchers dropped.

David Lewkowicz, a psychology professor at Florida Atlantic University in Boca Raton who wasn't part of the study, said the Yale research was intriguing. But he doesn't buy into the natural ability part. He said the behavior was learned, and that the new research doesn't prove otherwise.

"Infants acquire a great deal of social experience between birth and 6 months of age and thus the assumption that this kind of capacity does not require experience is simply unwarranted," Lewkowicz told The Associated Press in an e-mail.

But the Yale team has other preliminary research that shows similar responses even in 3-month-olds, Hamlin said.

Researchers also want to know if the behavior is limited to human infants. The Yale team is starting tests with monkeys, but has no results yet, Hamlin said.