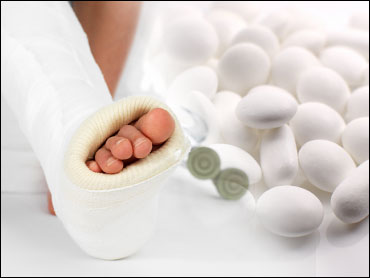 Deciding which medicine to give a child in pain just got easier: The first head-to-head study of three common painkillers found that ibuprofen works best, at least for kids with broken bones, bruises and sprains.

Available generically and under the brand names Advil and Motrin, ibuprofen beat generic acetaminophen and codeine in an emergency room study of 300 children treated at a Canadian hospital.

The youngsters, aged 6 to 17, were randomly assigned to receive standard doses of one of the three medicines. They then periodically rated their pain. Half an hour later, ratings were similar in the three groups. But starting an hour after taking the medicine, children who got ibuprofen reported substantially greater pain relief than the other two groups.

Children rated their pain on a 100-point scale before and after taking the medicine. At 60 minutes afterward, scores for children who got ibuprofen had dropped 24 points, compared with 12 points for the acetaminophen group and 11 points for the codeine group. The differences remained at 120 minutes.

Also at 60 minutes, about half the ibuprofen children reported what doctors considered "adequate" pain relief, or scores below 30, compared with 40 percent of the codeine children and 36 percent of the acetaminophen group.

There were no major side effects although one child was accidentally given an overdose of codeine and was removed from the study. That child was treated and monitored but showed no ill effects, the researchers said.

The study was done at Children's Hospital of Eastern Ontario in Ottawa, and a research institute at the hospital funded the study. Results appear in the March edition of Pediatrics, being released Monday.

The study sheds light on two common problems in pediatrics — children with broken bones, sprains and strains, and "what should we give them" for pain, said Dr. Catherine Skae, a pain specialist at Children's Hospital at Montefiore Medical Center in New York. "It's good that somebody looked at it systematically."

For parents, choosing a painkiller for kids can be confusing, partly because acetaminophen, sold as Tylenol, and ibuprofen both work against fevers. Codeine does too, but it's a mild narcotic available only by prescription.

The study should ease that dilemma, said lead author Dr. Eric Clark of the University of Ottawa.

Studies comparing ibuprofen with acetaminophen for pain relief have had conflicting results, but Clark said his is the first to compare all three drugs.

Doctors in hospitals often prefer using ibuprofen for children with broken bones because they seem to do better on it, and the study validates that practice, said Dr. Steven Krug, head of emergency medicine at Chicago's Children's Memorial Hospital.

Ibuprofen may work better for pain from trauma because it targets inflammation while acetaminophen and codeine do not, Krug said.

McNeil Consumer Healthcare, which makes both Children's Motrin and Children's Tylenol, issued a statement saying the study "confirms that both ibuprofen and acetaminophen are effective pain relievers in treating children's pain from body injuries that result in emergency room visits."

The company also acknowledged that the two drugs work differently.