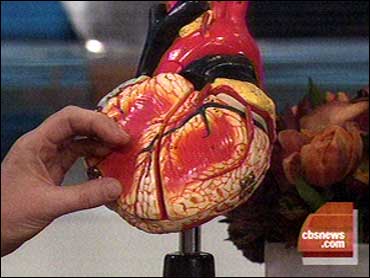 Heart disease kills more Americans than anything else. One-third of all deaths in the United States are caused by heart disease - nearly 2,400 a day.

Proper diet and exercise can prevent heart disease, but doctors have always wondered if the heart can heal itself. Now, new research offers an answer and a clue for treating heart disease, reports CBS News medical correspondent Dr. Jon LaPook.

A mushroom cloud half a century ago has helped clear up a vital medical question: Can the heart make new cells and repair itself?

"I would say that in the heart field, that this is one of those important studies that is going to change the way that we think for a very long time," said Dr. Richard T. Lee, of Brigham and Women's Hospital in Boston.

Scientists solved the mystery by going back in time.

Until it was banned in 1963, nuclear weapons testing above ground produced slightly radioactive carbon dioxide gas all over the planet. It entered the food chain. So if you were alive then, the radioactive material ended up in your DNA.

"The results are unexpected," said study author Bruce Buchholz of the Lawrence Livermore National Laboratory. "We weren't expecting this rate of turnover. Typically after a heart attack you don't see the repair."

A huge mass spectrometer at the the Livermore Laboratories in California enabled scientists to measure the extraordinarily tiny amounts of radioactivity, not thought to be harmful, that are present in people born before 1963.

"It allows us to really change the way we're thinking so that over the next five years, 10 years, we'll be able to re-set our approaches to heart disease," Lee said.

One new approach may be in treating heart attacks. When its blood supply is cut off, heart muscle dies and the scarred segment no longer beats normally.

If the heart can make new cells on its own, there may be ways to accelerate that process and speed up healing.

"There's a promise this may be a way to get the heart to repair itself," Bucholtz said.

From the era of the mushroom cloud, an unexpected silver lining.