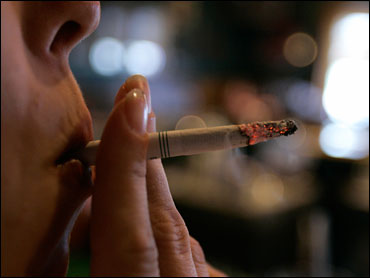 Dangling enough dollars in front of smokers who want to quit helps many more succeed, an experiment with hundreds of General Electric Co. workers indicates.

Among those paid up to $750 to quit and stay off cigarettes, 15 percent were still tobacco-free about a year later. That may not sound like much, but it's three times the success rate of a comparison group that got no such bonuses.

GE was so impressed it plans to offer an incentive program nationwide next year, aiming to save some of the company's estimated $50 million annually in extra health and other costs for smoking employees.

"This kind of reward system provides them with direct, positive feedback in the present," not just delayed, intangible health benefits, said Dr. Kevin Volpp, the lead researcher of the study.

Volpp, who oversees the health incentives center at the University of Pennsylvania, called the study the largest ever of employer incentives to stop smoking. Several past studies failed to find higher quit rates linked to financial bonuses, but he said those included too few people or the financial incentives were too tiny, some as low as $10.

The $750 was "a good incentive," said Dan Anzalone, a study participant who quit smoking cold turkey three years ago next month - after a 35-year habit.

"I was getting rewarded for something that I should be doing anyway," said Anzalone, 54. "You'd be surprised at what that little incentive does."

A logistics specialist at a GE plant in Schenectady, New York, Anzalone tried quitting with antidepressants about seven years ago but couldn't. He tried quitting on New Year's Day most years, but generally only lasted a couple days.

So he signed up for Penn's federally funded study, unaware that he would be paid. Half the 878 participants, at about 85 U.S. GE sites, were put in the financial rewards group; the other half were just encouraged to join quit-smoking programs and use the company's health coverage for doctor visits and anti-smoking drugs.

Results of the study, which began in 2005, were reported in Thursday's New England Journal of Medicine.

The incentive group got increasingly higher payments the longer they stayed off tobacco, up to a total of $750 after 12 months.

Anzalone said the incentive program was all he needed: He didn't go to smoking cessation classes or use nicotine patches or gum, or medicines.

"Every week got easier and easier," he said. "Now it's been three years and I don't even think about it."

The study showed that after nine to 12 months, about 15 percent of those being paid had stayed off cigarettes, compared to just 5 percent of the unpaid group. In addition, four times as many people getting cash completed a smoking cessation program.

Volpp said similar numbers of people in the two groups used aids such as nicotine patches and the drug Zyban, which reduces irritability and depression.

Dr. Norman Edelman, chief medical officer of the American Lung Association, said paying people for healthy behavior remains controversial. But he said the study was well done because it was "more real-world" than the tests drug companies run to get anti-smoking products approved. Study volunteers decided what classes to attend and which products to use, rather than having tightly controlled conditions and constant calls from nurses checking on them, he noted.

Edelman said the 15 percent quit rate is pretty good and that employers should consider trying such a program, although it's not clear it would succeed in settings outside workplaces.

GE's chief medical officer, Dr. Robert Galvin, said Wednesday that starting next January, the company will offer a quitting incentive program covering its 152,000 U.S. employees, at more than 250 sites. GE expects to recoup the costs of the smoking cessation program in three to five years.

"We know that incentives work," Galvin said. "We're very excited about it."

Not all those in the study saw the bonuses as crucial. Guy Ardizzone, 49, an engineer at a GE factory in Madisonville, Kentucky, smoked for "probably 30 years," then quit nearly three years ago. He said other factors were more important than the $750: completing a 12-week smoking cessation course, using Commit lozenges and his own motivation.

"I was ready to quit," said Ardizzone, who has five young grandchildren. "I want to enjoy them."