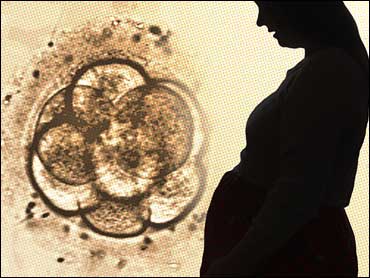 Scientists reported Sunday they had found a plentiful source of stem cells in the fluid that cushions babies in the womb and produced a variety of tissue types from these cells — sidestepping the controversy over destroying embryos for research.

Researchers at Wake Forest University and Harvard University reported the stem cells they drew from amniotic fluid donated by pregnant women hold much the same promise as embryonic stem cells. They reported they were able to extract the stem cells without harm to mother or fetus and turn their discovery into several different tissue cell types, including brain, liver and bone.

"Our hope is that these cells will provide a valuable resource for tissue repair and for engineered organs as well," said Dr. Anthony Atala, head of Wake Forest's regenerative medicine institute and senior researcher on the project.

It took Atala's team some seven years of research to determine the cells they found were truly stem cells that "can be used to produce a broad range of cells that may be valuable for therapy."

However, the scientists noted they still don't know exactly how many different cell types can be made from the stem cells found in amniotic fluid. They also said that even preliminary tests in patients are years away.

Still, Atala said the research reported in the scientific journal Nature Biotechnology expands far beyond similar work discussed at a heart research conference in November. There, Swiss researcher Simon Hoerstrup said he managed to turn amniotic fluid stem cells into heart cells that could be grown into replacement valves. Hoerstrup has yet to publish his work in a scientific journal.

Atala said the new research has found even more promising stem cells with the potential to turn into many more medically useful replacement parts.

"We have other cell lines cooking," Atala said.

The hallmark of human embryonic stem cells, which are created in the first days after conception, is the ability to turn into any of the more than 220 cell types that make up the human body. Researchers are hopeful they can train these primordial cells to repair damaged organs in need of healthy cells.

However, many people, including President Bush, oppose the destruction of embryos for any reason. The Bush administration has severely restricted federal funding for the embryo work since 2001, leading many scientists to search for alternative stem cell sources.

"Unfortunately it may not change the political debate," Prentice said. "The bill that is being proposed in the house is really a triumph of politics over caring for patients."

The cells from amniotic fluid "can clearly generate a broad range of important cell types, but they may not do as many tricks as embryonic stem cells," said Dr. Robert Lanza, chief scientist at the stem cell company Advanced Cell Technology. "Either way, I think this work represents a giant step forward for stem cell research."

It's the latest advance in the so-called regenerative medicine field that has sprung from Atala's lab in Winston-Salem, N.C. In April, Atala and his colleagues rebuilt bladders for seven young patients using live tissue grown in the lab.

In the latest work, Atala's team extracted a small number of stem cells swimming among the many other cell types in the amniotic fluid. One of the more promising aspects of the research is that some of the DNA of the amnio stem cells contained Y chromosomes, which means the cells came from the babies rather than the pregnant moms.

"While they are fascinating subjects of study in their own right, they are not a substitute for human embryonic stem cells, which allow scientists to address a host of other interesting questions in early human development," said Daley, who began work last year to clone human embryos to produce stem cells.