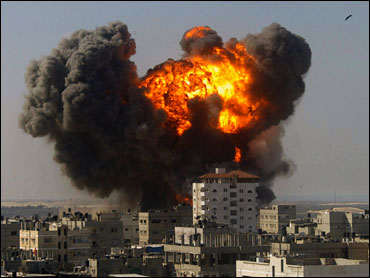 Well over half of nearly 1,400 Palestinians killed in Israel's Gaza war were civilians, including 252 children younger than 16, a leading Israeli human rights groups said Wednesday, challenging Israel's claim that most of the dead were militants.

Determining the number of civilian casualties is seen as key in the ongoing debate over whether Israel, along with Hamas, violated the rules of war in its three-week offensive against Gaza's Hamas rulers last winter.

The Israeli rights group B'Tselem on Wednesday published figures it said were compiled in months of research, including visits to families of victims. It said 1,387 Gazans were killed, including 773 civilians and 330 combatants. Thirteen Israelis also died, including four civilians.

The high number of Palestinian civilian deaths should compel the Israeli government to launch an independent investigation, the group said, adding that it considers the army's internal probe as flawed.

"If you take the figures and the sheer scale of damage there is a suspicion of an extreme use of lethal force," Michaelli said.

The military has acknowledged "rare mishaps" in its conduct during the war, but has denied it violated international humanitarian law. Israel refuses to cooperate with a U.N. war crimes investigation, alleging bias.

B'Tselem wrote that "the extremely heavy civilian casualties and the massive damage to civilian property require serious introspection on the part of Israeli society."

"It is not that the Israelis want to exterminate the Palestinians. They do it openly," Chavez said. "Remember the last Israeli aggression against Gaza. What was that, if not genocide?"

The military has put the Gaza death toll at 1,166, including 709 combatants and 295 civilians, but has refused to release a list of names or other evidence. The military said Wednesday that it believes B'Tselem's findings are based on flawed research, including reliance on what it said are exaggerated death tolls by Palestinian human rights groups.

Two Palestinian human rights groups have put the Gaza death toll at just over 1,400 and - like B'Tselem - released lists of names.

One explanation for some of the discrepancies between the army's figures and those of the human rights researchers is the definition of who is a combatant.

In defining combatants, B'Tselem included militants who are generally involved in fighting, even if at the moment of attack they are not taking part in hostilities.

The Israeli military appears to have used a more sweeping definition. During the war, Israeli officials said anyone involved with Hamas should consider himself a target.

B'Tselem noted that 248 Palestinian police officers were killed while at their stations, most in surprise air strikes on the first day of the war. The group said it placed them in a separate category - neither combatant nor civilians - because their status could not be determined. The military counted them as combatants.

A key difference was found in the number of deaths of children under 16 - B'Tselem said it documented 252 deaths, while the military said it knew of 89 children killed in the war.

B'Tselem said the group's researchers visited homes and collected photos, death certificates and other documents relating to all those deaths. In all, 320 Gazans under 18, all of them noncombatants, were among the dead, B'Tselem said. In addition, 19 minors were counted as combatants.

Michaeli said B'Tselem could only dispatch two Gaza field workers since the military prevented outsiders, including Arabic-speaking researchers from Israel, from entering the territory.

In addition to its report, B'Tselem has sent details of about 20 cases with alleged violations of the law to Israel's military prosecutor. Suspicions include firing on civilians or using them as human shields, B'Tselem said.

B'Tselem noted that the military withheld details that would have enabled the group to cross-check information. The discrepancy between the army's figures and those of B'Tselem is "particularly blatant concerning minors," the group said.