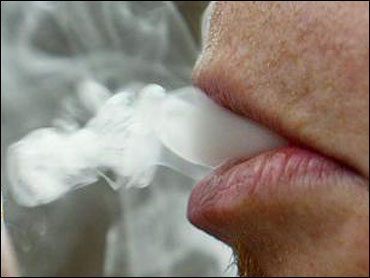 The level of nicotine that smokers typically consume per cigarette has risen about 10 percent in the past six years, making it harder to quit and easier to get hooked, according to a new report released by the Massachusetts Department of Health.

The study shows a steady climb in the amount of nicotine delivered to the lungs of smokers regardless of brand, with overall nicotine yields increasing by about 10 percent.

More nicotine means it can be harder to quit smoking, Dr. Ryan Bosch of George Washington University tells CBS News correspondent Wyatt Andrews. "I see it as a bigger challenge," Bosch says of smokers. "Yet again one obstacle in their quitting because of the increased dose."

Massachusetts is one of three states to require tobacco companies to submit information about nicotine testing according to its specifications and the only state with data going back to 1998.

The study found the three most popular cigarette brands with young smokers — Marlboro, Newport and Camel — delivered significantly more nicotine than they did six years ago. Nicotine consumed in Kool, a popular menthol brand, rose 20 percent, for example.

The report has anti-smoking groups calling for greater regulation of the tobacco companies.

"The increase in nicotine yield in Marlboro blows a hole in Philip Morris' claim that it doesn't want kids to start and it wants to help adults to quit," Matthew Meyers, president and CEO of the Campaign for Tobacco-Free Kids, tells Andrews.

The study has always measured nicotine levels based on the way smokers actually use cigarettes, health officials said, for example by partially covering ventilation holes as they smoke and taking longer puffs.

"The amount of nicotine in a cigarette has increased steadily over the past six years," the department said, indicating in its reports that the smoking habits simulated had not changed in that period.

"We want health care providers to know that smokers are getting more nicotine than in the past and may need additional help in trying to quit," Cote said.

Smokers who choose "light" brands hoping to reduce their nicotine intake are out of luck.

The report found for all brands tested in 1998 and 2004, there was no significant difference in the total nicotine delivered between "full flavor," "medium," "light," or "ultra-light" cigarettes.

The finding means that health care providers trying to help smokers quit may have to adjust the strength of nicotine replacement therapies like nicotine patches and gums, according to Fogerty.