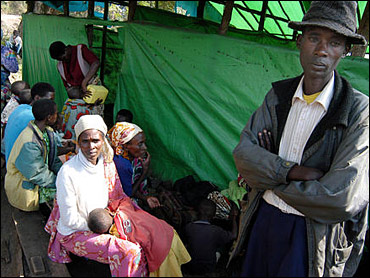 Six years of continuing conflict in Congo have claimed 3.8 million lives, nearly half of them children, with most victims killed by disease and famine in the still largely cut-off east, the International Rescue Committee said in a study released Thursday.

The international association for years has produced the most widely used running estimate of deaths in Congo, Africa's third-largest nation.

More than 31,000 civilians continue to die monthly as a result of the conflict, despite peace deals that ended major fighting in the 1998-2002 war, the New York-based group said, citing mortality surveys prepared with the assistance of on-site teams of physicians and epidemiologists.
Congo's death toll remains a third higher than the rest of sub-Saharan Africa 18 months after major peace deals, the International Rescue Committee said.

Most deaths come from easily treatable ailments, it said, citing measles epidemics known to have swept populations in the foreign- and rebel-held east during the war.

"In fact, Congo is the deadliest war the world has seen since the end of the Second World War, and ... these staggering figures have gone largely ignored by the media and world leaders," Dr. Richard Brennan, director of the organization's health unit, told Associated Press Television News in New York.

Researchers used a scientific random selection meant to produce a representative sampling. The surveyed 19,500 households across Congo and projected death tolls based on specific accounts of deaths within those households.

The survey found 2.7 deaths every month out of every 1,000 children under 5, a child mortality-rate twice that even of sub-Saharan Africa. Deaths among children accounted for 45.4 percent of the 500,000 estimated deaths from conflict in the latest deaths between the survey period of January 2003 and April 2004.

The size of Congo — a nation as big as Western Europe — and the length of Congo's conflict have helped heighten the death toll and limit outside awareness of civilian suffering.

Starting in 1998, the conflict in Congo quickly drew in the armies of five other African nations. Neighboring Rwanda and Uganda and allied Congolese rebel groups held control of the east and northeast. Zimbabwe, Angola and Namibia held the west for the government.

Fighters in rebel- and foreign-controlled areas throughout the war blocked normal trade routes, plundered food stores and blocked farmers from producing crops, according to aid groups and refugees.

A rare visit to cut-off central Congo at the height of the war, by The Associated Press to the front-line town of Kabinda, found war-displaced emerging from hiding in the bush bringing emaciated children, adults dying of measles and women dying of complications from childbirth.

A U.S. National Academy of Sciences committee approved the original methodology, which largely is the standard process for estimating suffering from crises in areas that have been all or largely cut off.

While the methods of the survey have been largely accepted, some statisticians have cautioned against overprecision in estimating death tolls when on-the-ground documentation of deaths is not possible, as in many wars.

Congo's government, working with a U.N. peace force growing to 16,000, is working to secure government control across the country.

Thursday, for example, Pakistani U.N. forces broke up a camp of an armed militia in east Congo, a move spurred by reports that militia fighters were preying on civilians and threatening comrades who wanted to disarm, a U.N. spokesman said.

The raid marked stepped-up activity by U.N. and Congolese forces as the two groups jointly try to secure Congo's lawless east after a 1998-2002 war.

The raid targeted a camp of a mixed-ethnic militia, the Army of the Congolese People, at Mahagi, 90 miles northeast of Bunia, in Ituri province.

Militia fighters there had threatened efforts at area disarmament camps opened in a five-month-old U.N.-led campaign to disarm all of the thousands of fighters of various militias in Congo's east.

"The operation was intended to expel fighters from the camps, because they were a danger to the transit camps for demobilized combatants, whom they threatened with death, but also to the population," U.N. spokesman Christophe Boulierac said by telephone from the northern city of Bunia.

A small number of the fighters targeted in Thursday's raid agreed to lay down their weapons and enter demobilization camps, Boulierac said. The others fled.

There were no injuries in Thursday's raid, which also garnered 15 automatic rifles and other arms.

The key targets are militia groups roaming the forests and volcanic east, a lawless area of few roads that saw little government presence even before the war.

Congo's failure to rein in militias seen as threatening regional security helped spark the war. The U.N. and others accused occupying nations of prolonging it to plunder Congo's gold, diamonds and other wealth.