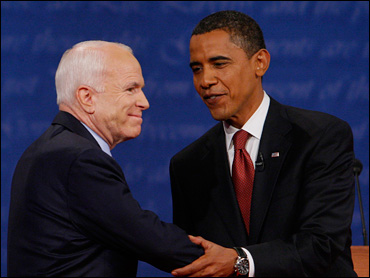 Conducted by Stanford researchers and published by Public Opinion Quarterly, the study analyzed over 100 advertisements from the 2008 presidential campaign to determine the darkness of the two nominees' skin color in the edited images.

In contrast, McCain's face in the ads appeared significantly lighter.

The study also examined whether seeing a darker face on Obama activated negative stereotypes of black people in the minds of voters.

The researchers showed subjects different images of Obama with lighter and darker complexions:

They then asked them to play a fill-in-the-blank game, completing word puzzles like "C R _ _ _." One viewer could write "CROWD" while another could fill in the spaces as "CRIME."

Forty-five percent of those who viewed a darker Obama were more likely to complete the word as a negative stereotype of black people (e.g. "LAZY" for "L A _ _"). Only 33 percent of respondents who saw a lighter-skinned Obama did so.

The study concluded that "darker images of Obama can indeed activate negative stereotypes about Blacks, despite the fact that Obama is a counter-stereotypical" example.

The issue of darkening was also at the forefront of the 2008 Democratic primaries, when critics of Hillary Clinton accused her of darkening her rival's complexion in attack ads.

Factcheck.org, a watchdog project of the University of Pennsylvania's Public Policy Center, checked the particular ad and found that Obama's visage did indeed seem darker -- but so did the rest of the ad. The folks at Factcheck.org pointed out that the differing color quality could have been affected by various video encoding and online uploading processes. Or another explanation: as is typical of attack ads, the negative advertising simply skews towards employing darker hues and ominous music.

The findings from Factcheck.org: "without further evidence to the contrary, we see no reason to conclude that this is anything more than a standard attempt to make an attack ad appear sinister, rather than a special effort to exploit racial bias as some Obama supporters are saying."