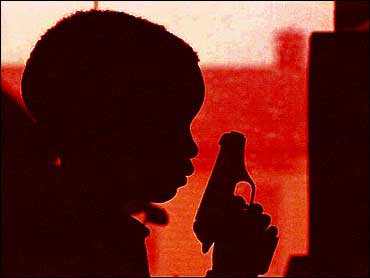 About 1.7 million U.S. children live in homes that have loaded and unlocked guns, according to what is described as the first comprehensive survey of gun storage in homes across the country.

The study, published Tuesday in the journal Pediatrics, found that 2.5 percent of children live in homes with loaded and unsecured firearms. Estimates from the early 1990s had put the percentage at 10 percent. The new results suggest a decline, but that doesn't mean there's cause for celebration, said Catherine Okoro, a study author.

"That's still too many children to be put at risk," said Okoro, an epidemiologist with the federal Centers for Disease Control and Prevention.

The study is based on a 2002 telephone survey of about 241,000 adults and is the first to provide data on gun storage in all 50 states and the District of Columbia, its authors said.

Nationally, 33 percent of adults said they kept firearms in or around their home. The highest percentage was in Wyoming, where 63 percent said they had firearms. The lowest percentage was reported in the District of Columbia, where 5 percent reported having guns at home. The district has long-standing bans on handguns and semiautomatic weapons.

A little more than 4 percent of the respondents nationally said they keep guns loaded and unlocked, and 2.5 percent reported having loaded, unlocked firearms in homes where children lived.

Alabama had the highest proportion — 7.3 percent — of homes in which children lived and guns were kept loaded and unlocked. The next highest states were Alaska (6.6 percent), Arkansas (6.6 percent), Montana (6.4 percent) and Idaho (5.2 percent). At bottom was Massachusetts, with 0.3 percent.

Researchers said they aren't certain why some states reported higher rates than others, but they believe people living in rural communities are most likely to have loaded guns in or around the house.

That wouldn't explain why Alabama is No. 1, however, said Jim McVay of the Alabama Department of Public Health.

"We have a hunting tradition in the Deep South, but there's no excuse for having loaded guns in the house," said McVay, director of the department's Bureau of Health Promotion & Chronic Disease.

Okoro said she hoped the survey results will be used by state public health officials as they work on intervention programs to prevent firearm deaths.

About 1,400 children are killed by firearms each year, according to CDC estimates. It's not known how many of those are killed by guns left around the house, the researchers said.

But they noted a study published in a February issue of the Journal of the American Medical Association that showed safe gun storage may prevent deaths. The Seattle-based study found that in homes with guns, there were fewer incidents of shootings when guns were kept locked, unloaded and separated from ammunition.