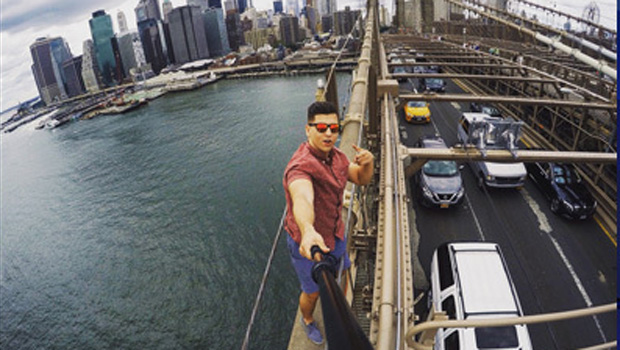 NEW YORK -- A college student found his way onto an unauthorized area of the Brooklyn Bridge and took a selfie this past weekend, and police said his actions were "irresponsible and illegal."

David Karnauch of Tennessee told CBS New York he walked across an overhead beam on the bridge and took the selfie while standing on a side railing.

"I didn't have any clue that NYC is ramping up security," Karnauch, of Chattanooga, told CBS New York via Skype. "There was nobody there to stop me from climbing onto the bridge."

In a statement, NYPD Deputy Commissioner of Intelligence and Counter-terrorism John Miller said Karnauch's actions did not constitute a "security breach," but were still ill-advised and forbidden.

"The person most endangered was the individual, whose goal seems to be bringing attention to himself," Miller said in a statement to CBS2. "It was however, irresponsible and illegal. Had the officers patrolling the bridge arrived while he was there, he would have been arrested, as others have been."

The Brooklyn Bridge has been the subject of several high-profile trespassing incidents in the past year.

In August of last year, Russian tourist Yaroslav Kolchin was arrested for allegedly scaling the bridge. He claimed he only wanted to take photos of the top.

The New York City Department of Transportation later installed new barriers to prevent anyone from climbing to the top of the span.