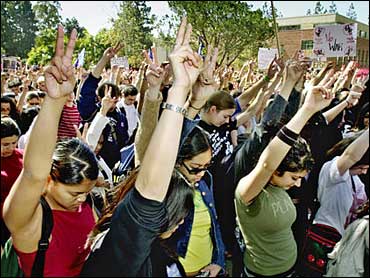 High school and college students around the country walked out of class Wednesday to protest a war with Iraq, holding a series of rallies organizers predicted would be the biggest campus demonstrations since the Vietnam War.

The "Books not Bombs" strike was being coordinated by the National Youth and Student Peace Coalition, formed following the Sept. 11 attacks.

"The Bush administration is intent on plunging America into an illegitimate and pre-emptive war in Iraq that will only increase danger for Americans and the world," the coalition says on its Web site. "At the same time education, healthcare, and the economy are being neglected."

Members of the coalition include the Muslim Students Association of the U.S. and Canada, environmental groups, several socialist student groups, and the Young Communist League.

Tens of thousands of students at more than 300 colleges and universities had pledged to join the protests, according to the coalition. But attendance was spotty at many campuses and some groups called for support of the Bush administration.

Thousands of students also rallied for peace in Britain, Sweden, Spain, Australia and other countries. The U.S. protests were also geared to call attention to the effects of a war on education, health care and the economy.

Manon Terrell, a 19-year-old sophomore, missed three classes to take part in a rally at Stanford University attended by about 300 people carrying signs bearing slogans such as, "It's the Middle East, not the Wild West."

"This is a personal thing for me because my friends are going to fight this war," said Terrell, a civil engineering major. "It's not going to be Bush and his cronies in business suits on the front lines. They're going to take people of color and poor people."

Dozens of Stanford professors endorsed the rally, either by telling students there would be no penalties for leaving class or by canceling class.

In Los Angeles, 18 demonstrators were arrested for blocking an intersection during an interfaith protest as several hundred people cheered. About 1,000 students at Santa Monica City College rallied and 500 Venice High School students left class for a protest on the school's front lawn, waving signs and chanting "No more war, no more war."

About 500 students walked out of class at the University of Maryland. And in Milwaukee, 40 students lined the sidewalk in front of the Marquette University student union during an hour-long protest.

"It's good to let people know students have a say in what happens in the world," said Abir Chaudhry, 19, who carried a sign that read "God Does Not Bless America Only."

Hundreds of students walked out in Texas. At San Antonio College, Melissa St. John, who favors an Iraq invasion, got into a nose-to-nose shouting match with a young man who argued no positive link has been made between Saddam Hussein and Osama bin Laden.

St. John later said she doesn't like the idea of war, but diplomatic efforts to rein in Saddam have failed.

"None of us like it, but it's time," she said. "Our country is under attack."

Sporadic rain fell as about 1,500 protesters - and a small number of Bush administration supporters holding a counter demonstration - gathered at Penn State University. The protesters later presented the mayor with petitions asking the borough council to oppose war with Iraq and resist elements of the USA Patriot and the Homeland Security acts.

About 125 students and a few faculty members turned out in gray, drizzly weather for a rally at Miami University in Oxford, Ohio. Ross Meyer, a junior and founder of a student peace group, said he was disappointed by the turnout and someone interrupted his speech by urging the crowd to support the government if the United States invades Iraq.

Farther north, around 100 people rallied at an Albany, N.Y., shopping mall to protest the arrest of 61-year-old man who wore a T-shirt that read "Peace on Earth" and "Give Peace a Chance" while he shopped two days earlier.

Another anti-war group, Not in Our Name, called on workers to call out sick and business owners to close up shop Wednesday to protest a war with Iraq. It could not immediately be determined whether any widespread sick-outs had occurred.

Andrew Pearson took the day off from work to hang anti-war banners from highway bridges and later joined a demonstration at the University of North Carolina in Chapel Hill.

"We're trying to show folks across North Carolina that people are ready and willing to disrupt their daily lives to stop the war," Pearson said.

One of the students put out a flyer asking students to walk out of their classes. Media and police showed up, and helicopters are flying overhead, but when it came time for the walkout, nobody walked out.

School authorities had explained that the students who walked out would get an unexcused absence for the classes they missed, although they did not forbid the walkout. But the warning apparently was enough to convince the students to stay in class.

In Virginia, where many colleges were on spring break, only two students showed up for a demonstration at Virginia Commonwealth University in Richmond.

"If this were something the world wanted to do together, I would support it," said Jim Sparks, a 32-year-old biology graduate student. "It's a big mistake to go it alone."

Teenagers chanting "No war for oil" staged a rowdy sit-in outside Tony Blair's official residence Wednesday, warning the prime minister that one day soon they would be voters, as thousands of youths cut class worldwide to protest a possible war with Iraq.

The protest by British students — mostly ages 13 to 16 — appeared to catch security at No. 10 Downing St. by surprise and overshadowed the presentation of a petition by poets against the war. Extra police were brought in to control the protesters when some tried to scale the gates.

"We don't mean anything to Blair because we can't vote. But we will be able to soon, and he will pay the price for a war in Iraq," said 16-year-old Emma Marriott.

Thousands of Bangladeshis, including students, professionals and politicians, also held marches and burnt effigies of President Bush, carrying bamboo and paper placards with slogans like "War No. Peace Yes" and "No Blood for Oil."

In Sweden, about 5,000 students gathered for a peaceful rally in Stockholm before marching through the city with banners reading "Stop the War," and "Fight U.S. Imperialism."

Thousands of high school students took to the streets of Sydney Wednesday to protest the possible war.

Half a million Egyptians took part in a state-orchestrated demonstration against war in Iraq, with thousands of workers bused in to Cairo from various public companies.