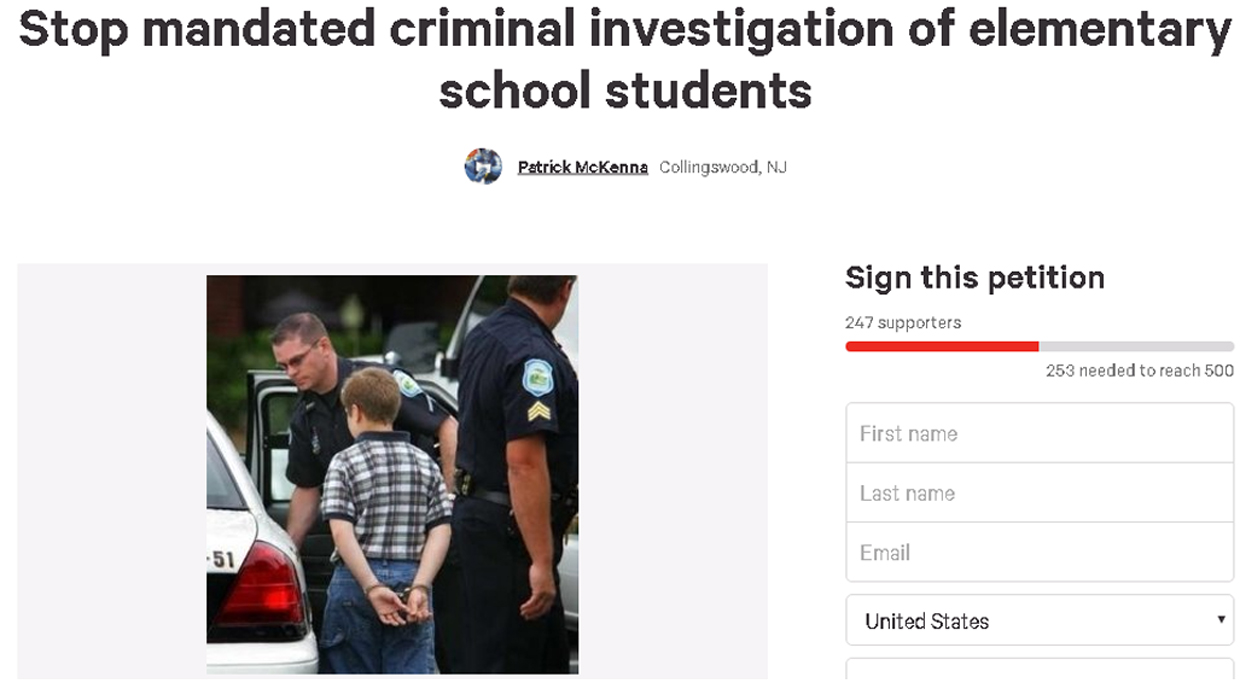 COLLINGSWOOD, N.J. -- The police response to a New Jersey elementary school after a 9-year-old's comment over a brownie has drawn outrage on social media -- and the viral story comes amid town controversy over school police reporting policy.

Police responded June 16 to the William P. Tatem Elementary School in Collingswood after reports that a student there made a racist comment, reports Philly.com. The boy's mother, Stacy dos Santos, told the website he was making a comment about brownies being served during an end-of-year class party -- not about skin color.

Dos Santos said the boy was "traumatized" after being interviewed by a police officer.

"There was a police officer with a gun in the holster talking to my son, saying, 'Tell me what you said.' He didn't have anybody on his side," the woman said.

The student's exact statement is confidential because it's a part of a juvenile police report, town mayor James Maley told Crimesider. Nonetheless, the story has gone viral as social media users question the necessity of police questioning for an elementary school student.

The incident is reportedly part of a broader dispute between local officials that has lead to an increase in police calls from schools within the last month -- as many as five calls per day in the district of 1,875 students, Collingswood Public Schools Superintendent Scott Oswald told the website. That's because, according to local reports, police and school officials believed the Camden County Prosecutor's Office told them police should investigate even minor incidents at schools that would typically be dealt with internally.

The increase in police calls has led to widespread controversy in the town, and some parents have launched a Change.org petition urging the prosecutor's office to "stop mandated criminal investigation of elementary school students."

"I don't believe my children need to be questioned by the police every time there is an issue at school, nor do I want them questioned without my presence," wrote a Collingswood mother who signed the petition. "I also don't believe that instilling fear of police in our children is positive."

The alleged directive from the prosecutor's office that has caused the controversy came at a May meeting between town officials over a delay from school officials in reporting to police an allegation of criminal conduct at a Collingswood high school, according to Philly.com. The allegation hasn't been made public.

The prosecutor's office and town mayor have both since issued statements "clarifying" responsibilities of school officials when it comes to reporting potential criminal activity. The prosecutor's office told Crimesider those requirements are no different than standards outlined in a a statewide memorandum of agreement between schools and law enforcement -- which requires school officials to report serious crimes that involve weapons, drugs or sex abuse.

But speaking to Crimesider, Maley said that's not the impression he was left with following the meeting.

He said the prosecutor's office instructed schools officials to call police about every incident that could be criminal. When asked what constituted "criminal," according to Maley, "it was just kind of left open, with kind of a little gentle admonishment saying 'Err on the side of calling.'"

Others were also left with the impression that schools were being mandated to report issues like rough-housing and name-calling as well. In a letter obtained by the Courier-Post, Collingswood school board president David Routzahn said the prosecutor's office "defines almost every issue as a 'potentially criminal issue.'"

"It is unfathomable to us that the (prosecutor's office) believes that having uniformed police officers responding to incidents of name-calling or a second-grade playground shove is appropriate for the children or taxpayers of Collingswood," Routzahn wrote.

In another letter obtained by the paper, Collingswood Police Chief Kevin Carey said the office told police and school officials the New Jersey Division of Child Protection and Permanency should also be contacted "on just about every incident at the school." The child protective agency was reportedly contacted after the elementary school student's brownie comment.

Speaking to Crimesider, Det. Andy McNeil of the Camden County Prosecutor's Office said the issue has been resolved. He provided a copy of a letter to his office from Maley, who wrote to "clarify" that the terms of the statewide memorandum of agreement haven't been changed or enhanced.

Maley said he expects to meet again with police, school officials and the prosecutor's office next week. A public meeting will likely also be held, he said.

"At this point it's like a post mortem. ... Right now, the policy has changed back to the way it was," Maley said. "All we're doing now is trying to figure out what the heck happened, and what we can do to make sure it never happens again."