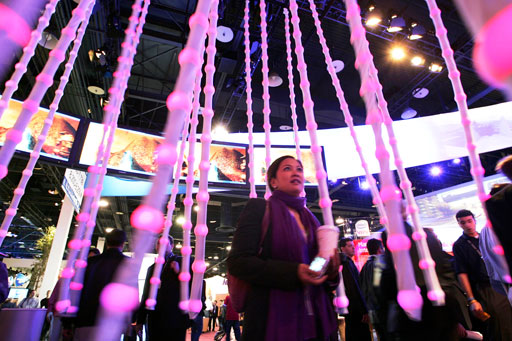 To the uninitiated, stock car races are miserable affairs. The 500 one-mile laps that constitute a standard NASCAR race seem an interminable and maddeningly repetitive activity. The sound of the engines is ear-splitting, the fumes are enough to make you gag, and there is no respite from the heat which beats down on many of NASCAR's southern venues.

Add to that the ever-present danger of a car spinning out of control at 200 miles an hour and spewing debris into the stands. A car hood is not as easily fended off as, say, an errant football.

Why Do They Go?
No one would dispute that driving takes skill. To control an automobile on a major highway is challenging enough, much less on a track traveling at three times the legal limit. But glass blowing also requires a tremendous amount of skill, and it draws few spectators.

One obvious answer is that stock car racing, like any sport, has its own internal structure, its strategies and tactics. It has an almost clannish language associated with it: dragging and drafting, rubbing and sling-shotting. The seasoned spectator can judge how good a pit crew is. They notice who's running fast and loose, and who's setting up for a final push. And, from the movements of the car, they gauge the character of its driver.

Men of the People
It is a sport of personalities. Fan loyalties are as strong as in any other sport, if not stronger. Race fans seem to have a special relationship with the drivers.

The history of stock car racing is one of accessibility. In the fledgeling days of the leagues, the need for funding conditioned drivers to be as engaging as possible. Drivers would let fans sign their cars in exchange for pocket change. This legacy, while born of necessity, has continued as the driving spirit of auto spectatorship.

Most NASCAR venues allow for infield access, and a whole sub-culture has developed around this type of spectatorship. These avid fans, dubbed "racer chasers," follow the circuit, scheduling vacations around major races. They tramp all over the country in recreational vehicles, staking out spots on the infield and mingling with drivers and crews. The atmosphere is festive, almost carnival-like. It is the equivalent of letting fans sit on the bench at a basketball game, or stroll around the bull-pen at a baseball game.

The Need for Speed
As with many sports, the most avid spectators are those with a love of participating. Many toyed with go-karts or micro-midgets (modified go-karts) as kids. They found a love of speed and movement at an early age.

When asked if, given the opportunity, he would step into a stock car for a test drive, Bethel, Connecticut, resident and racing fan Ken Berg said, "In a New York minute. As a passenger or a driver. And you know what a New York minute is, don't you?" he added. " It's the time it takes for the guy behind you to beep his horn after the light turns green." Speed is the ultimate adrealine rush, even experienced vicariously.

Back to the Future
What to many is simply a bunch of cars buzzing around a track is to more and more people an activity with chess-like strategy and movie of the week drama.

Auto racing, once a regional interest, is earning national appeal. All 32 NASCAR races are televised nationally. The fan base is diversifying with a rise in mean income. The traditional race venues in Taladega, Daytona, Darlington, and Bristol are now joined by super-speedways on the West Coast.

But many fear that corporate money and baby-boomer interest will sour the friendly face of auto racing that has earned it such a loyal following. With the introduction of a national audience and big-money corporate sponsorship, quaint signatures are giving way to corporate logos, infield access to luxury sky boxes.