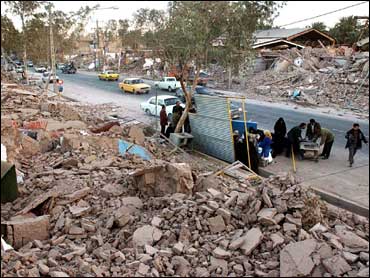 At least 23 people have been killed and more than 80 villages seriously damaged in a strong quake that hit northern and central Iran Friday, the Interior Ministry said.

Ministry spokesman Jahanbakhsh Khanjani told The Associated Press that the villages hit hardest by the late afternoon quake were near Alamout, about 80 miles west of Tehran.

"The damage is estimated between 30 to 50 percent," he said.

At least 23 people have been reported dead and over 100 injured in the quake, measured at 6.2 magnitude by the U.S. Geological Survey.

Sixteen people were buried in their cars and over 70 others injured by landslides and falling boulders on the mountainous Tehran-Chalous road, state-run television reported.

Five people were killed in Mazandaran province and two in Qazvin province, Tehran radio said. The quake also damaged homes and buildings in both provinces.

The radio said at least 20 other people in several areas were also injured.

The quake shook eight provinces in central and northern Iran. Tehran University's seismological center said there were 12 aftershocks, including one with a 4.4-magnitude.

The center said the quake had a 5.5 magnitude and said its epicenter was in the village of Baladeh, 43 miles northeast of Tehran, near the Caspian Sea.

In Tehran, the quake broke windows in parts of the city, causing panicked residents to rush outdoors.

An army spokesman said the army was ready to begin rescue operations if called upon, according to Tehran radio.

The broadcast said the quake damaged telephone lines in the area.

Iran is located on seismic fault lines and is prone to earthquakes. Last December, about 26,000 people died in a magnitude 6.6 quake that hit the southeastern city of Bam. In 1990, a quake killed 40,000 people there.

The USGS measured the depth of the quake at between 10 and 16 miles which makes it fairly shallow but still deeper than the Bam quake, said USGS geophysicist Waverly Person in Golden, Colorado.

The USGS said it bases its magnitude calculation by looking at measurements of a number of seismographs around the world. This figure can sometimes differ from a measurement recorded closer to the epicenter.