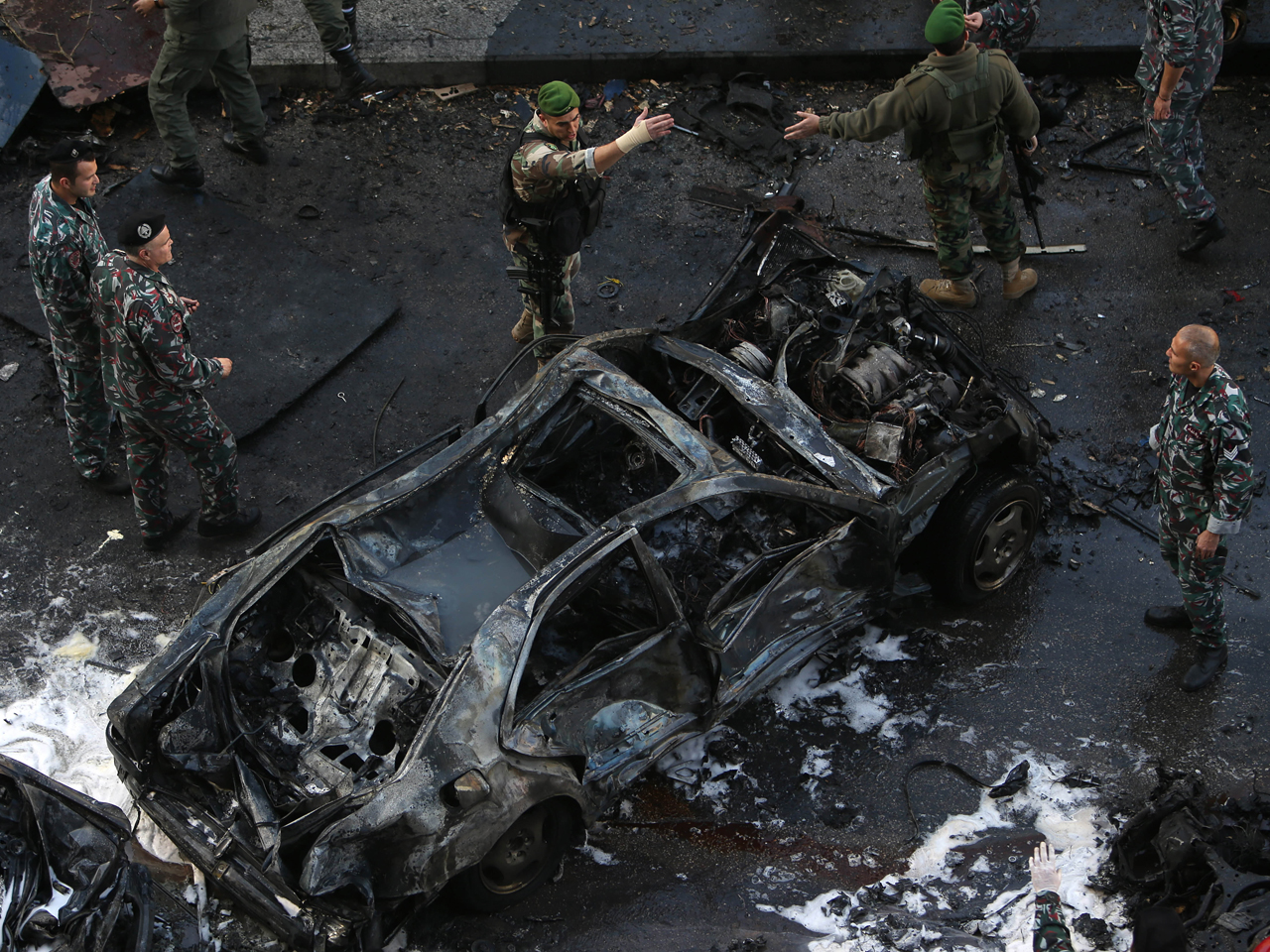 BEIRUT - A powerful car bomb killed a prominent Lebanese politician critical of Syria and its ally Hezbollah, hitting his SUV Friday as it drove through a ritzy business district near Beirut's waterfront, shredding trees and scattering glass and twisted scraps of metal across the pavement.

Allies of the slain politician, former finance minister Mohammed Chatah, indirectly blamed the Shiite Hezbollah group for the bombing, hiking tensions between Lebanon's two main political camps at a time when the country's factions are already deeply at odds over the civil war in neighboring Syria.

The explosion Friday morning echoed across Beirut and threw a pillar of black smoke above the city's skyline. The force of the blast punched a nearly 2-yard-wide crater in the street, set at least three cars on fire and shattered windows in office buildings and apartment towers up to a block away.

The 62-year-old Chatah, who was also a former Lebanese ambassador to the United States and a senior aide to ex-Prime Minister Saad Hariri, was killed along with his driver and four others, the National News Agency reported. The Health Ministry said at least 70 people were wounded.

In a statement, the 15 members of the U.N. Security Council strongly condemned the attack and "reiterated their unequivocal condemnation of any attempt to destabilize Lebanon through political assassinations."

"Diplomats at the U.N. were shocked by the boldness of the attack, which brought back memories of the assassination of former Prime Minister Rafik Hariri, for whom Chatah had worked, said CBS News' Pamela Falk, U.N. Headquarters.

The bombing deepened the sense of malaise in Lebanon, which is struggling to cope with the fallout from the civil war in neighboring Syria, including the influx of more than 1 million Syrians who have sought refuge from the violence in their homeland.

Lebanon also has had only a weak and ineffectual caretaker government since April, with the two main political blocs unable or unwilling to reach a compromise to form a new Cabinet.

Hariri, a Sunni politician, heads the main, Western-backed coalition in Lebanon, known as the March 14 alliance. Hezbollah, which enjoys the support of Syria and Iran and commands a militia stronger than the national military, leads those on the other side of Lebanon's political divide.

There was no immediate claim of responsibility for Friday's attack, but the bombing was reminiscent of a string of assassinations of around a dozen members of the anti-Syrian Hariri camp that shook Lebanon between 2004 and 2008.

The most dramatic of those was the massive suicide bombing in 2005 in downtown Beirut - some four blocks from the site of Friday's explosion - that killed Hariri's father, Rafik, also a former prime minister. Hariri's allies accused Syria of being behind the killings, a claim Damascus denied.

The opening session in the Hariri assassination trial is due to be held in less than three weeks in The Hague, Netherlands, where the U.N.-backed tribunal investigating his killing is based. Five Hezbollah members have been indicted for their alleged involvement in the assassination. Hezbollah rejects the accusations, and has refused to hand the men over.

Hours after Friday's bombing, Saad Hariri indirectly blamed Hezbollah for Chatah's killing, saying in a statement "the ones who are running away from international justice and refusing to appear before the international tribunal" were behind the assassination.

Hariri said those responsible are "the same ones who are opening the doors of evil and chaos into Lebanon" and "brought regional fires to our country," in a clear reference to Hezbollah's armed intervention in support of Syrian President Bashar Assad in the civil war next door.

The Shiite group's overt role in Syria has inflamed Lebanon's already simmering sectarian tensions. A wave of violence that has washed across the country this year has fueled predictions that Lebanon, which is still recovering from its own 15-year civil war that ended in 1990, is on the brink of slipping back into full-blown sectarian conflict.

In recent months, a series of explosions have struck districts dominated by Hezbollah, apparently in retaliation for the group's decision to dispatch its fighters to Syria, while a deadly twin car bombing hit the northern city of Tripoli, a Sunni stronghold. There have also been repeated clashes between Sunnis - who largely back Syria's rebels - and Shiites and Alawites who back Assad.

The last major assassination in Lebanon took place Oct. 19, 2012, when a car bomb killed Lebanon's top intelligence chief, Wissam al-Hassan. Al-Hassan, a member of Hariri's security circle, was a powerful opponent of Syria's influence in Lebanon and many here blamed his killing on Syria.

Friday's bombing punctured the early morning lull along a quiet street in a posh neighborhood in downtown Beirut that is home to five-star hotels, luxury high-rises and high-end boutiques.

"We were having breakfast when the explosion went off, shattering the glass and shaking everyone," said Iman Mohammed, a 36-year-old Egyptian visiting Beirut who was staying at the Ramada Hotel less than 100 meters (yards) from the blast site. "People started running, children were barefoot and some people fled their room in their pajamas."

The army quickly cordoned off the area to prevent people from getting close to the scene, where the twisted wreckage of several cars was still smoldering. Hours later, forensic experts in white hazmat suits were still scouring the site while workers at the neighboring office blocs were sweeping glass into the street from windows several stories up.

Security officials said the car that blew up was rigged with up to 130 pounds of explosives, and parked along Chatah's route. The blast struck the former minister's SUV as he was driving to a meeting at Hariri's downtown residence, the officials said on condition of anonymity because they were not authorized to brief the media.

Prosecutor General Samir Hammoud said a preliminary investigation indicated the explosives were packed into a stolen Honda CRV and detonated by remote control. He said investigators will now focus on analyzing footage from security cameras in the area.

Chatah's death marks a serious loss for the pro-Western camp in Lebanon.

The 62-year-old was a prominent economist who once worked at the International Monetary Fund in the U.S. and later served as Lebanese ambassador to the U.S. He was one of the closest aides of Rafik Hariri. He later served as finance minister when Saad took over the premiership, and stayed on as his senior adviser after he lost the post in early 2011.

Caretaker Prime Minister Najib Mikati denounced the assassination, "which targeted a political and moderate figure who believed in dialogue, the language of reason and logic and the right to different opinions."

In Washington, Secretary of State John Kerry also condemned Friday's bombing, calling it an "abhorrent terrorist attack" and describing Chatah as "a voice of reason, responsibility and moderation."

Hariri's 2005 assassination sparked massive demonstrations that eventually led to the withdrawal of Syrian troops from Lebanon, following nearly three decades of military presence and domination of its smaller neighbor.

Chatah was a moderate Sunni politician who opposed Hezbollah and Assad.

His last tweet, posted an hour before Friday's explosion, read: "Hezbollah is pressing hard to be granted similar powers in security & foreign policy matters that Syria exercised in Lebanon for 15 yrs."