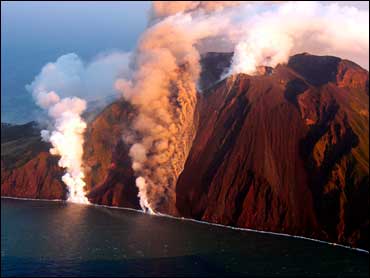 On a tiny Sicilian island, residents have learned to live with a neighbour that never stops showing off.

He belches, has a hot temper and there's been some serious worry he could blow his top.

As CBS News correspondent Charlie D'Agata reports from Stromboli, the "he" residents are talking about is one of Europe's biggest volcanoes.

Stromboli has been making a spectacle of itself since the dawn of time, but the latest eruption was big.

Far from fearing its occasional outbursts, villagers on this little island 40 miles off the coast of Sicily embrace their volcano.

"I love this volcano very much," resident Irene Lanza said.

A few weeks ago, the mighty volcano – to which they affectionately refer as just 'him' – began to groan, and rumble… and then split its sides.

When the volcano punched another hole in the side of the mountain, it triggered a river of lava. Residents we spoke to said they could sense something building up, they spoke of their doors rattling, but few expected anything this spectacular.

(AP)
The volcano's new twin rivers of lava are not only spectacular to see as they plunge into the Mediterranean Sea, they're a good sign.

Rather than bottling up all that fiery rage inside, the volcano is just letting off a little steam.

Scientists feared a repeat of events five years ago, when a similar eruption triggered a massive landslide, causing a 30-foot tidal wave that demolished homes close to the shore.

But this time they were able to warn residents to clear the coast hours before the volcano blew.

"So you knew this was going to happen?" D'Agata asked Professor Bernardo De Bernardinis.

"Yes, definitely – this was very satisfactory," he replied with a chuckle.

Excited authorities say there's little risk to the 300 or so people who live on the island, although they haven't ruled out further eruptions.

So, for now, there's no need to evacuate – not that some lifelong residents would ever leave.