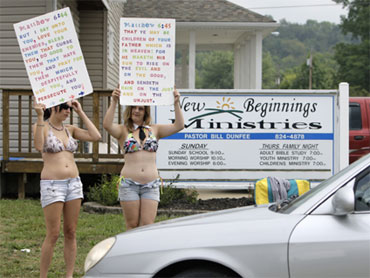 Strippers in bikinis sunbathe in lawn chairs, their backs turned toward the gray clapboard church where men in ties and women in full-length skirts flock to Sunday morning services.

The strippers are protesting a fundamentalist Christian church whose Bible-brandishing congregants have picketed the club where they work. The dancers roll up with signs carrying messages adapted from Scripture, such as "Do unto others as you would have done unto you," to counter church members who for four years have photographed license plates of patrons and asked them if their mothers and wives know their whereabouts.

The dueling demonstrations play out in the U.S. state of Ohio, where nine miles of cornfields and Amish-buggy crossing signs separate The Fox Hole strip club from New Beginnings Ministries.

Club owner Tommy George offered to call off his not-quite-nude crew from their three-month-long protest if the church responded in kind. But pastor Bill Dunfee believes that a higher power has charged him with shutting down the strip club.

"As a Christian community, we cannot share territory with the devil," Dunfee said. "Light and darkness cannot exist together, so The Fox Hole has got to go."

New Beginnings is one of four churches in this one-traffic-light village of 900 people, 60 miles outside Columbus. There's one gas station and a sit-down restaurant that serves country staples like mashed potatoes with gravy and Salisbury steak.

On Sunday, four of The Fox Hole's seven strippers and more than a dozen supporters garnered both scorn and compassion from churchgoers - and quite a few honks from pickup trucks and other passing vehicles.

Laura Meske - known as Lola, stage age 36 but really 42 - hid behind a sign proclaiming, "Jesus loves the children of the world!" as the preacher extended his hand for a shake.

Two nights earlier, Dunfee and more than a dozen churchgoers had stood outside the club, one of them calling out Meske's stripper name.

"Everybody has sinned, and that doesn't mean I'm not gonna get into heaven," Meske said, the stud piercing in her chin shimmering in the sunlight. "I believe in Jesus. I don't believe what they preach. They preach hate."

Debi Durr, who attends the church, disagreed. "You don't stand up there for four years for hate. That's not hate. That's love," she said.

Dunfee has offered to help the strippers pay for food, rent, utilities and gas if they leave The Fox Hole. But many of the women say their jobs are only a stopover on the way to work in cosmetology or the medical field - a meal ticket that shelters them from another stigma: welfare.

She and other Christian groups that work with women in the adult entertainment industry have criticized Dunfee's methods of ministry as a means of putting the strippers on the defensive instead of showing support.

The Fox Hole operates in a white plywood box of a building. Beer cans and a dollar bill peaked out from the grass like Easter eggs last Sunday.

The club encourages customers to check out its $30 (euro24) private dance special, promoting it on the kind of sign convenience stores use to advertise cheap milk and cigarettes. It's here where dancers strip down to panties and pasties for cash.

Meske - a tattooed mother of four - said she made $30 instead of a couple hundred dollars (a hundred fifty euros or so) last Friday with the protesters outside.

"I'm not the most beautiful woman in the world," she said. "I go out there and I try to make my money."

A few houses and a restaurant separate the club from another white building, a church where some of the strippers donate blood during drives for the American Red Cross.