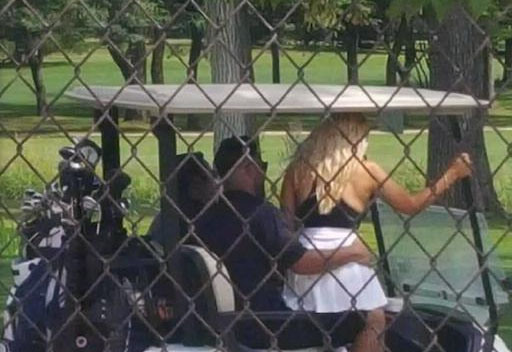 It was a day at the golf club like no other, with strippers and lewd behavior - all in full view of a children's playground.

Frustrated parents want to know how a public golf course could allow a strip club to have such a racy event, CBS Chicago reports.

The Pink Monkey, a strip club located in Chicago's South Loop, operates behind closed doors. But the strippers took their show on the road last month and ended up at a very public park district owned golf course, in the middle of the day.

"I was shocked," she says of the event. "We were chasing young boys away on their bikes with cameras. Passersby, you could see, were in shock."

Bensenville's White Pines Golf Club is funded, in part, by tax dollars. It is surrounded by houses and a park where kids where playing when the adult show began.

"There was one grandmother there who was mortified," say Balog, who snapped sometimes graphic pictures of the offensive behavior. "There was a lot of nudity and things that don't belong on a public golf course."

In one shot, she says, a girl is spread-eagled over a golf cart, with a man looking up her skirt. In other pictures, she says, it appeared a sex act was being performed. She said there were a lot of women's tops coming down.

Residents have been complaining about the Pink Monkey golf outing -- the third such event at White Pines Golf Club -- and the community wants it stopped.

Paul DeMichele is one of the upset neighbors.

"I take my four-year-old grandson to that park," he says. "I would not want to have to explain to him what those people are doing. It was just the wrong place for it."

DeMichele and other residents say Bensenville Park District Director John Wassinger is mismanaging the golf course and it is a free-for-all.

"To me, there is a need for more oversight," DeMichele says.

After the Pink Monkey event, another golf course party angered neighbors later that month. Kids could easily access kegs of beer left unattended near the seventh hole and a public sidewalk. A teen, with a parent nearby, repeatedly walked up and poured a beer to show the lack of oversight.

"She was even able to bring a cup of beer off of the golf course," Balog says.

Bensenville Park District Director John Wassinger says his office was unaware of the "objectionable activity." He apologized to all those impacted.

Park commissioners are investigating golf outings, and the Pink Monkey will now be banned from future outings there.

A woman answering the Pink Monkey's phone, who declined to identify herself, said there was no nudity.