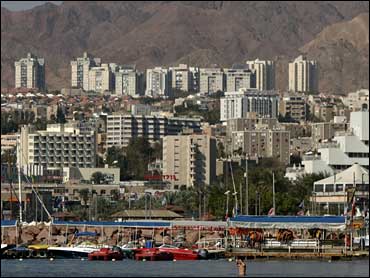 A string of rockets was fired early Monday toward the Israeli resort city Eilat, and one hit in neighboring Jordan, injuring four people, officials in both countries said.

It was the second such attack this year, following a similar volley in April that Israeli authorities say was fired from Egypt's Sinai peninsula.

This comes after Israel's Prime Minister Benjamin Netanyahu sternly warns Hamas leaders on Sunday that Israel "will continue to use all means to protect the people of Israel and the children of Israel."

A series of explosions were heard early Monday in the narrow coast of the Red Sea where Eilat and the Jordanian city of Aqaba are located side by side, both popular tourist destinations.

Police spokesman Micky Rosenfeld confirmed that the blasts were caused by rockets, but says no one was injured in Eilat.

Eilat Mayor Meir Itzhak Halevi told Israel Radio there was no sign any of the rockets hit inside Eilat's city limits. Israeli media reported that three rockets fell into the Red Sea and two in open spaces.

One rocket hit in Aqaba, exploding on a main street in front of the Intercontinental Hotel, Jordanian Information Minister Ali Ayed said. Four Jordanians were wounded, one critically, he said.

Two of the wounded were taxi drivers and one of their cars was destroyed, said witness Mohammad Shudeifat, who was on his way to work in the area when the blast struck.

Following Monday's attack, Egyptian police in Sinai launched an investigation but found no indication that the rocket fire came from their side of the border, Egyptian security officials said. They spoke on condition of anonymity because they were not authorized to talk to the press.

In April, a series of rockets were fired, most falling into the sea off Eilat but one flying into Jordan, hitting a warehouse but causing no injuries. Israeli police said that attack came from the Sinai, where Islamic militants are active and weapons smuggling is rife.

In January 2007, a Palestinian suicide bomber killed three people in Eilat, the first ever to hit Israel's southernmost city.