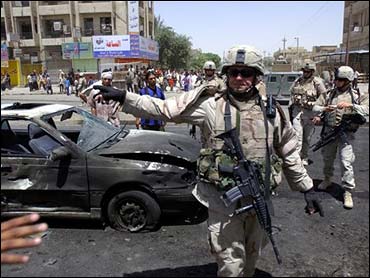 A coordinated string of four bomb attacks within seven minutes killed at least 18 people and wounded 39 in northern Iraq Tuesday, while a Baghdad car bomb injured 28, officials said, ending a relative lull in violence that had fallen over the country in recent days.

Hundreds of U.S. and Iraqi soldiers descended on the remote northern city of Tal Afar near the Syrian border on Tuesday, launching a major operation against insurgents following weeks of attacks against Iraqi security services there, military officials said.

Tuesday's attacks in northern Iraq appeared coordinated and aimed at checkpoints manned by members of Iraq's fledgling army, which has been a constant target of insurgents opposed to the country's new U.S.-backed government.

The first explosion, caused by a roadside bomb, rocked Hawija, about 40 miles southwest of Kirkuk, at around 9:30 a.m. Soon after, three suicide bombers waiting in lines of cars at army checkpoints to the west and north of Hawija struck in quick succession.

"I was standing some distance from the checkpoint when I heard a big explosion and I was thrown onto the ground," Lt. Sadiq Mohammed 26, whose right leg was wounded in the Dibis attack, said from his hospital bed. "This is a terrorist act because real resistance should only target American troops, not Iraqis trying to protect their country."