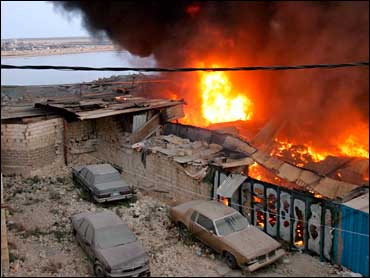 Fighting intensified in Lebanon and Israel Sunday night, with yet another Israeli barrage hitting Beirut and Hezbollah rockets flying deep into Israel.

The Rafik Hariri International Airport has been closed since Israeli aircraft fired missiles at its three runways Wednesday, the first of five days of attacks on targets in Lebanon. The airport now has been hit four times.

Israel has struck bridges, roads and army bases, knocked out electricity to much of the Lebanese capital and imposed an air and sea blockade since Hezbollah guerillas captured two Israeli soldiers Wednesday.

Rockets fired from Lebanon exploded in the Israeli town of Afula and Upper Nazareth, the military said, showing a range farther south than previous barrages.

The two towns are about 25 miles south of the Lebanese border, about the same distance as Haifa, which was hit earlier Sunday with a rocket that killed eight people.

The population of Nazareth is made up of Muslim and Christian Arabs who are Israeli citizens.

Eight Canadians from the same family were killed
Sunday in an Israeli air raid that hit a Lebanese town on the border with Israel, Canadian and Lebanese officials said. Canadian Foreign Affairs Minister Peter MacKay said six other Canadians were in critical condition.

An Israeli airstrike on a civil defense building in the southern port city of Tyre killed at least nine civilians and wounded 42 others, Lebanese security officials said. The raid on the 12-story building adjacent to a hospital tore off a large section of the top three floors of the building.

Eight people were killed
in the northern city of Haifa when Hezbollah rockets smashed into the city's train station. Soon after, Israeli warplanes bombarded the guerrilla group's headquarters in south Beirut again with a barrage of missiles.

Israel bombed the Palestinian Foreign Ministry building in Gaza City early Monday, causing widespread destruction, pushing ahead with its three-week offensive in Gaza as troops clashed with militants in the northern part of the territory. The huge blast from the second Israeli airstrike on the ministry in less than a week collapsed a wing of the building and damaged dozens of houses.

A senior U.N. envoy on Sunday called for the release of captured Israeli soldiers, the protection of civilians and infrastructure and expressed support for Lebanon's appeal for a cease-fire. Vijay Nambiar came to the besieged Lebanese capital leading a U.N. delegation to explore ways to end the violence shaking Israel and Lebanon.

Two Marine Corps helicopters evacuated 21 Americans from Lebanon to Cyprus on Sunday, and U.S. officials urged others to wait for a formal evacuation plan before they try to leave. The U.S. citizens evacuated Sunday included a family of four with a sick child and four students.

World leaders at the G-8 Summit in St. Petersburg declared Sunday that extremist groups in the region cannot be allowed to plunge the Middle East into chaos and must immediately halt their attacks. The group issued a strong statement condemning Hezbollah militants but also urged Israel to exercise restraint in its military actions against Lebanon.

Fears are mounting that the fight could expand across the region as Israel accused Iran and Syria - top Hezbollah backers - of supplying the guerrillas with sophisticated new missiles that hit Haifa. The Syrian government warned of an "unlimited" response if Israel attacks it. "Any aggression against Syria will be met with a firm and direct response whose timing and methods are unlimited," Information Minister Mohsen Bilal said.

Hezbollah leader Sheik Hassan Nasrallah urged Arabs and Muslims worldwide to support his guerrillas, saying that his group is fighting Israel on their behalf and that the battle has just begun.

A confident-looking Nasrallah said in a speech aired on his Al-Manar TV that Hezbollah guerrillas were at their "full strength" and that the group had "no choice" but to hit the northern Israeli city of Haifi with rockets Sundayh after Israel struck civilians in Lebanon.

"As long as the enemy acts without limitations, it is our right to act similarly," he said.

Nasrallah said he taped the message at 1 p.m. Sunday, dispelling reports that he had been hurt in the massive Israeli bombing of his headquarters overnight Sunday as some Israeli reports said. The message was aired about six hours after that time.

"We are in our full strength and power. We will choose the place and the time, and we will not let the enemy impose the means or place to use their weapons," he said.

Facing criticism by some in Lebanon that Hezbollah dragged the country into a fight with Israel by snatching two soldiers last week, Nasrallah sought to rally Lebanese and the Arab annd Islamic world behind his fighters, painted the battle as a chance for the Arab and Islamic world to deal a defeat to Israel.

"You Arab and Muslim people must take a position toward your future, the future of your children," he said. "The peoples of the Arab and Islamic world have a historic opportunity to score a defeat against the Zionist enemy... We are providing the example."

"Hezbollah is not fighting a battle for Hezbollah, or even for Lebanon, but for the Islamic nation," he said.

He denied Israeli claims that Iran had sent members of its elite Revolutionary Guards to help Hezbollah.

"I completely deny the presence of any Iranian troops," he said. "Lebanese are the ones firing these weapons. They talk about Iranians to diminish and humiliate us as Lebanese and Arabs that we don't have the capabilities and experience."