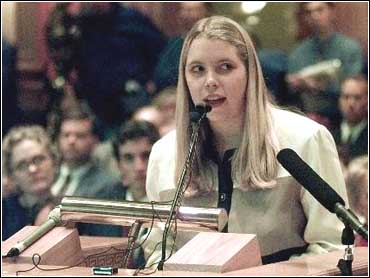 Robyn Anderson testified to the Colorado State Legislature late Thursday, in hopes of making it tougher to do what she had done, reports Reporter Rick Sallinger of CBS News in Denver.

Anderson's friends Eric Harris and Dylan Klebold killed 13 people plus themselves at Columbine High School. She bought three of the weapons for them.

"I can tell you it was entirely too easy to purchase the guns and I honestly believe something should be done," said Anderson.

She said she wouldn't have bought the two shotguns and a carbine at a gun show if background checks had been required. She denied having any knowledge how the weapons were to be used.

The state House Judiciary Committee approved measures that would require background checks for all purchases at gun shows, prohibit gun sales to people under age 21 and ban straw purchases, which occur when a person buys a gun for another who is legally barred from owning a firearm.

The bills must still be approved in the full House and the Senate.

Unlike the two men accused of helping Klebold and Harris purchase the semiautomatic handgun used in the shootings, Anderson was not charged with a crime. That's because in Colorado it's not illegal for an adult to give a rifle to a minor.

The bill to require background checks on all gun show sales was sponsored by Democrats.

At gun shows, unlicensed private dealers sit at tables next to licensed ones, who must conduct the background checks. Gun rights advocates noted that gun sales at shows are subject to the same laws that apply to gun sales anywhere else.

The road to stricter gun control has been proven difficult to navigate, even in the wake of the Columbine shootings.