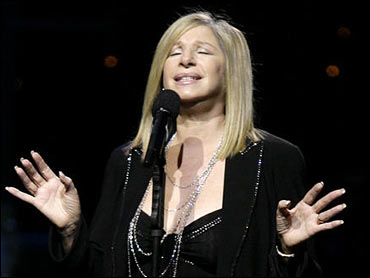 How does Barack Obama lure wealthy donors to a big-money fundraiser in Hollywood? Bring in Barbra Streisand as the headline performer.

The Oscar-winning singer and actress was to perform Tuesday night on Obama's behalf in Beverly Hills. It was to be a two-step evening with a reception and dinner costing $28,500 a person followed by a later event featuring Streisand at $2,500 a ticket.

Obama was flying to Los Angeles after an appearance Tuesday morning in a Denver suburb.

The wealthy fundraiser comes on a day when the crisis in the U.S. economy remained an urgent issue for many Americans. Monday's sharp sell-off left the Dow Jones industrials and the Standard & Poor's 500 index down by more 4 percent, eroding the value of individual retirement and investment accounts, for example.

Streisand originally backed Sen. Hillary Rodham Clinton but switched to Obama when he emerged as the Democratic presidential nominee.

Streisand has been outspoken in criticizing John McCain's selection of Alaska Gov. Sarah Palin as his running mate on the Republican presidential ticket.

"This calculated, cynical ploy to pull away a small percentage of Hillary's women voters from Barack Obama will not work," Streisand wrote on her Web page. "We are not that stupid!"

"I believe John McCain chose Gov. Palin because he truly believes that women who supported Hillary - an experienced, brilliant, lifelong public servant - would vote for him because his vice president has two X chromosomes," Streisand said. "McCain's selection of Gov. Palin is a transparent and irresponsible decision all in the name of trying to win this election."

Obama is financing his presidential race with private contributions after abandoning a pledge to take public financing capped at $84 million. His campaign announced Sunday it had collected $66 million in August, a fundraising record for any presidential candidate in a monthlong period.

By comparison, McCain raised $47 million in August, a personal best for his campaign as well. After claiming the GOP nomination, McCain accepted the $84 million in taxpayer funds allotted the public financing system for the race.