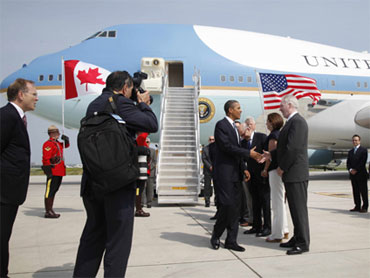 Forget the Fockers. Thursday night, it was all about The Barbra.

Yes, as in Streisand, marking her return to the screen after an eight-year absence in the "Meet the Parents" sequel, which hit theaters Wednesday.

Dressed in a deep-blue Donna Karan knee-length dress topped with a fluffy blue-gray coat, Streisand arrived with actor-husband James Brolin on her arm and proved the classiest, most courteous and -- shocker -- most accessible of all the "Meet the Fockers" stars.

Streisand, a youthful 62, made the scene earlier than any of her co-stars, offering ample photo opportunities by taking a relaxed stroll down the red carpet. She even generously acknowledged and answered a handful of unplanned questions lobbed out by reporters.

What about this role made you do it, she was asked. "I think the world needs a few laughs," Streisand replied, with a hint of wistfulness.

Things were pretty funny on the premiere line, too, as celebrities reacted to Streisand sightings.

"I just saw her!" bubbled Virginia Madsen, already on a high from her Golden Globe nomination Monday for her work in the acclaimed road-trip comedy "Sideways." "I touched her coat and I kissed her," Madsen continued. "And I kissed her husband!"

So, was it better to kiss husband or wife?

Getting Streisand back onscreen wasn't easy, noted Jay Roach, who directed both "Parents" and "Fockers."

"You know, she was reluctant because she was working on her house," he explained. "So, it was either us or the house."

According to Roach, what convinced Streisand was a scene involving De Niro, some oil and a massage table.

Recalled "Fockers" co-writer James Herzfeld, "Even in the first read-through, all the lines she was just nailing. It's kind of like, 'Oh my God! This is why she's Barbra Streisand.'"

Will there be a sequel to the sequel?