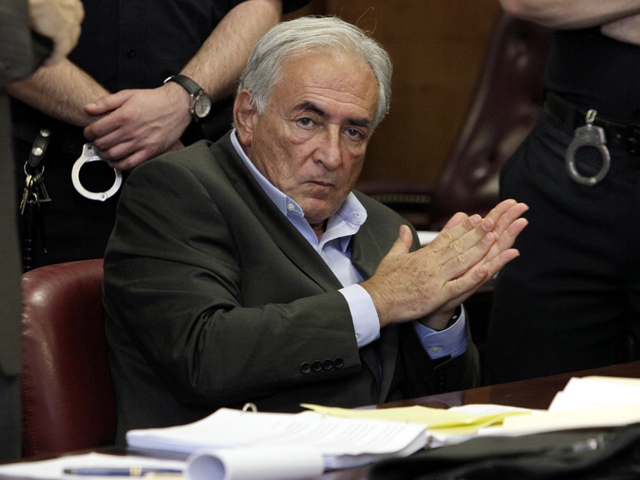 NEW YORK - Dominique Strauss-Kahn declared he had diplomatic immunity and complained that his handcuffs were too tight after he was taken into custody on allegations he tried to rape a Manhattan hotel maid, court documents filed Thursday show.

The documents filed by prosecutors provide a chronology of statements leading to the arrest of the former leader of the International Monetary Fund, who was taken into custody by Port Authority police at John F. Kennedy International Airport on May 14 as he tried to leave on a Paris-bound flight.

One of his attorneys, Benjamin Brafman, said Thursday he had no comment.

Strauss-Kahn, who is free on $1 million bail under house arrest at a luxury townhouse, maintains he did not attack the maid at Sofitel hotel.

The new court documents describe Strauss-Kahn seemingly confused as he is taken into custody.

"What is this about?" Strauss-Kahn repeatedly asked detectives, according to the documents.

He asked detectives whether he needs an attorney, responded to questions about whether he is hungry (at one point saying he would "like some eggs") and complained about his handcuffs, the documents say.

"Manhattan detectives need to speak with you about an incident in a hotel room," responded one detective as they go from the airport to the Manhattan Special Victims Squad on May 14 at about 5:15 p.m., the documents say.

"Then I need to make a call and let them know I won't be at my meeting tomorrow," Strauss-Kahn told the detective. Then he added, "These handcuffs are tight."

French politicians and citizens were upset about images of a handcuffed Strauss-Kahn as police walked him in front of a crowd of cameras on May 15 as he was taken from a police precinct to court to face charges of attempted rape and sexual abuse. Such images would be illegal in his French homeland.

The account begins with Strauss-Kahn calling May 14 — apparently at or on his way to the airport — to employees at the hotel to tell them he had left his phone in his luxury room after checking out.

About 9 p.m. that evening, after previously declaring he had diplomatic immunity, Strauss-Kahn tells a detective that he would like to call his lawyer and asks for his cell phone.

"We're going to have to wait for the detectives to come back," the detective says. "I don't have access to your phone."

"Do I need a lawyer?" Strauss-Kahn asks.

"It is your right to have one in this country if you want," the detective replied. "I don't know if you have some kind of diplomatic status."

"No, no, no, I'm not trying to use that. I just want to know if I need a lawyer," Strauss-Kahn said.

"That is up to you," the detective says.

Strauss-Kahn was formally placed under arrest about 2:45 a.m. on May 15, according to the documents.