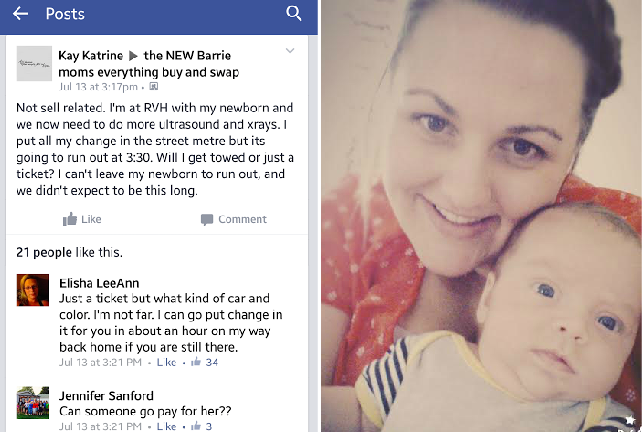 With a wailing newborn in her arms at the emergency room, Kaylee Goemans had enough to worry about; she didn't want to add a towed car to the list.

Luckily, a group of kind strangers from Barrie, Canada, refused to let that happen.

The 27-year-old mom rushed her "fussy" 6-week-old son, Dominic, to the hospital last week after her family doctor called to tell her he had a knot in his bowel filled with liquid and air. When she arrived, she put all of the change she had in a parking meter, but it wasn't going to be enough.

That's when Goemans decided to turn to a group of women on Facebook who would understand her situation -- moms.

"Will I get towed or just a ticket?" Goemans asked a Facebook group for moms, explaining that she was at the hospital and doctors needed to do more ultrasounds and X-rays on her son. "I can't leave my newborn to run out, and we didn't expect it to take this long."

Dozens of women who belonged to the group responded, some even offered to pay the meter for her.

"Just a ticket, but what kind of car and color. I'm not far. I can go put change in it for you in about an hour on my way back home if you are still there," one woman responded.

"Can someone go pay for her?" another asked.

Within 40 minutes, a woman arrived to put more change in the meter.

"Done," Stephanie Goguen commented, posting a photo of the meter with two hours of time added.

Goguen was working at the Royal Victoria Health Center when she saw the post.

"When I first noticed the post I had just sat to wait for my ride after work," she told CBS News. "I thought I am right here, how can I help."

In total, five women, including Goguen, ended up stopping to fill the meter, Goemans confirmed.

"It made my situation so much less stressful -- so I was able to focus on my son's needs and not about the car being towed," she said.

Goemans knows she will have to go to more doctor appointments with her son, who was diagnosed with intussusception and a heart murmur, but this hospital visit is one she'll never forget.

"I was overwhelmed" with the response, she said.

She hopes her story will inspire more people to pay it forward.

"It's a rough world right now and we only have each other in it," Goemans said. "We need to show the next generation how important it is to help others who need it."

One small gesture can mean the world to someone, Goguen agreed. "I have a saying, 'Not every day is good, but there is good in every day!'"